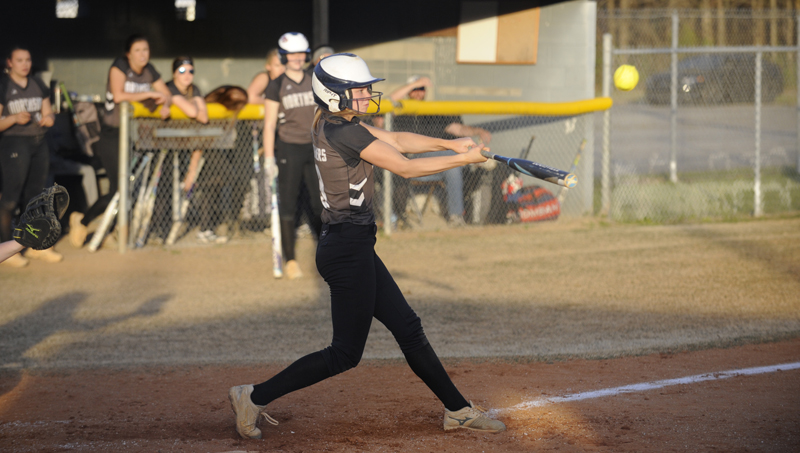 RACKING UP THE HITS: Northside’s Kathleen Slade connects for a hit earlier this season. Collecting three hits in yesterday’s victory at Pamlico County, Slade accounted for half of the Panthers’ hits in the 3-1 win. (Sean Finnerty | Daily News)

SNOW HILL — The Washington baseball team almost let yesterday’s game at Greene Central slip through its fingers in the bottom of the seventh after building a five-run lead, but the Pam Pack managed to hold on for the 6-5 win and keep its spot atop the conference standings.

Washington (10-3, 6-1 2A Eastern Carolina Conference) held a 6-1 lead over the Rams (5-6, 3-4 2A ECC) heading into the bottom of the seventh after scoring all of its runs in the top of the fifth. Greene Central scored four runs to cut its deficit to one run, but Logan Everette was brought onto the mound to get the final out and save, which he did with a strikeout.

Hunter Hall picked up the win for the Pam Pack, giving up one run on two hits, while striking out five Rams in four innings of work. Mason Weaver relieved Hall, surrendering four unearned runs on two hits and racking up seven strikeouts in 2.2 innings of work.

Hall also led Washington with two RBIs, while Weaver and Tyler Rowe chipped in with an RBI each. The Pam Pack collected seven hits as a team, with Robert Pollock and Will Crisp getting two apiece to lead Washington.

The Panthers (3-11, 2-5 1A Coastal Plains Conference) gave starting pitcher Ryan Cornelius some run support early, plating two runs in the top of the first, as Cameron Craig and Tyler Modlin both crossed home plate. But that was the limit of Northside’s offense, as it finished with three hits. Douglas Dixon led the Panthers with two hits and an RBI, as Caleb Alligood supplied the other hit.

Pamlico County (6-7, 6-1 1A CPC) answered with two runs in the bottom of the first and added a run in the fifth and sixth innings to close out the game’s scoring.

BAYBORO — Not having lost to a conference foe yet, the Northside softball team found itself challenged in a pitchers’ duel last night at Pamlico County. But the Panthers showed their resolve, eventually pulling out a 3-1 win in eight innings.

Northside (10-4, 7-0 1A CPC) didn’t have the greatest of nights at the plate, collecting only six hits, but starting pitcher Madison Braddy’s performance kept the Hurricanes (4-5, 4-3 1A CPC) from having much success at the plate either. Pitching all eight innings, Braddy held Pamlico County to one run on three hits, while collecting 10 strikeouts.

Northside scored first, grabbing a run in the third before Pamlico County tied the game in the fifth. The teams battled through two scoreless frames to head into extra innings, where the Panthers scored twice in the eighth to grab the win.

CHOCOWINITY — Scoring nine runs in the bottom of the first last night, the Southside baseball team then coasted to a 15-0 win over South Creek in four innings to push its record back to .500.

After plating nine runs in the first inning, the Seahawks (6-6, 3-3 1A CPC) continued to turn the screws on South Creek (1-10, 0-7 1A CPC), adding two more runs in the second before plating four runs in the fourth.

Among three Seahawks with two hits in the game, Bryan Gutierrez led Southside with four RBIs. Also notching two hits on the night were Dylan Humbles and Will Warren, who chipped in with three and two RBIs, respectively. Campbell Barnes, Jordan Adams and Davis Porter each had a base hit, while Hundley Stallings supplied Southside’s other RBI in the game.

Porter pitched all four innings for the Seahawks, striking out four Cougars and allowing three hits.

CHOCOWINITY — The Southside softball team entered yesterday’s home game in the midst of a four-game losing streak in conference play, but the Seahawks put an end to it with a 16-13 win over South Creek.

Scoring two runs in each of the first four innings, Southside (7-5, 2-4 1A CPC) held an 8-6 advantage over South Creek (1-8, 0-7 1A CPC) heading into the fifth. The Cougars scored a run in the top of the fifth to bring themselves within a run, but the Seahawks scored eight runs in the bottom of the frame to give themselves a comfortable lead.

South Creek scored a run in the sixth and five more in the seventh to make things interesting, but pitcher Alexis Whitehurst got the Cougars’ final two batters to pop out and ground out to end the game.

Southside collected 11 hits as a team, with Laura Hodges’ three hits leading the way. Also recording multiple hits in the game were Shantel Cannon — who led the Seahawks with four RBIs — and Marah Gottwalt, who both had two hits. Delaney Ayers and Hodges both contributed with two RBIs each, and Morgan Dixon, Kendall Alligood, Madison Easley, Talia Askew and Gottwalt all chipped in with an RBI apiece.