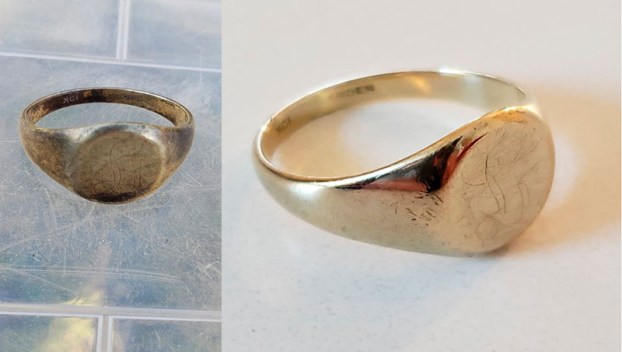 BEFORE AND AFTER: After nearly 50 years buried in a field off of U.S. Highway 17, just north of Washington, this gold ring was unearthed by a local metal-detecting hobbyist and returned to its owner. A quick scrub and the ring looked good as new. (Matt Sopher)

Nearly 50 years after it was lost, a treasured piece of jewelry has been found thanks to a metal-detecting hobbyist.

Matt Sopher, owner of Turning Point Renovations & Remodeling, recently found the gold signet ring while scanning a field just outside of Washington. He’d heard of the ring, because its owner had never forgotten about its loss.

“I told him, ‘Draw me a map and tell me where you think you lost it.’ I found it on the third signal I got when I dug down about six inches. … I’ve cleaned it and polished it. I’m sure he’s going to be tickled to death,” Sopher said last week.

Ralph A. Lee Jr., known as Randy, was, indeed, tickled to have his long-lost ring returned. He was a boy when he lost the gold signet ring his parents gave him, about 13 or 14 years old, he said.

Lee said he’d been using a chainsaw, helping to chop up a tree that had fallen in a field, the day his ring went missing. He’d gone back to look for it several times over the decades, when the field was plowed — just to see if it’d turn up. But he had no such luck, until he pointed Sopher in that direction.

“I’m real appreciative of (Sopher),” Lee said. “I love that ring. And it’s still shiny and you can still see the initials in it. It was like I just lost it yesterday.”

Sopher said he and a group of other metal-detecting fanatics regularly scan local fields for lost treasure, always asking permission from property-owners first. He said he’s come across pieces of eight and a Spanish 4 reales coin, but he hadn’t had a find he could return to the original owner so long after the fact. Lee said the ring may no longer fit, but it’s still an emotionally significant find.

“It’s not an expensive ring. It’s really quite simple, but it’s like getting another present from my parents (both deceased). That’s really special to me,” Lee said.

The owner of Players Vape, the sweepstakes and vaporizer shop that was the scene of a deadly shooting during an... read more