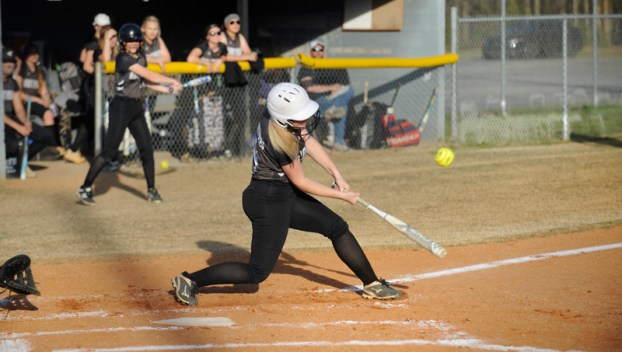 SLUGGING AWAY: Northside's Taylor Chase connects for a base hit against rival Southside earlier this season. The sophomore played a big part in the Panthers' 8-5 win over Riverside yesterday, as she hit a third-inning grand slam. (Sean Finnerty | Daily News)

WILLIAMSTON — The Northside softball team made a big step yesterday evening toward establishing its supremacy over the 1A Coastal Plains Conference this season, defeating home team Riverside, 8-5, for its second win over the Knights this year.

The Panthers (11-4, 8-0 1A CPC) were firing on all cylinders at the plate, recording 14 hits in the game. All but one Northside player had a hit, but Taylor Chase and Rylie Norman supplied the power as Chase hit a grand slam and Norman hit a home run. Chase had a game-high four RBIs, while Norman, Kathleen Slade, Cameron Rose and Teagan Pilgreen chipped in with an RBI apiece.

Scoring four runs in the third and two in the fifth and sixth, Northside held an 8-0 lead in the final inning. Taking advantage of some Panther errors, Riverside (11-2, 5-2 1A CPC) plated five runs in the last inning.

WILLIAMSTON — The Northside baseball team just didn’t have the requisite firepower to keep up with Riverside last night, falling to the Knights, 11-1, in five innings.

After scoring in the top of third, Northside (3-12, 2-6 1A CPC) found itself trailing just 2-1, but Riverside (13-2, 8-0 1A CPC) responded with a run in the bottom of the third and blew the game wide open in the fourth with an eight-run scoring spree.

The Panthers had only two hits on the night, with Tyler Modlin supplying a hit and an RBI, while Dawson Boyd chipped in with a double.

North Lenoir (5-8, 3-5 2A Eastern Carolina Conference) actually struck first, scoring an unearned run in the top of the second. But Washington (12-0, 8-0 2A ECC) shut the Hawks down from that point, holding the visitors to two hits over the game’s seven innings while striking out 12.

The Pam Pack then went to work at the plate, tying the game at 1-1 in the bottom of the second and scoring four runs in the fifth and another in the sixth. Summer Campbell led Washington with two hits and added an RBI, while Kaylee Elks’ two RBIs were a game-high. Laci Campbell and Desiree Maurizzio both added an RBI as well.

WASHINGTON — Engaged in a pitchers’ duel, the Washington baseball team’s pitching gave out at the wrong moment as North Lenoir scored five runs in the top of the seventh to defeat the Pam Pack, 7-2, last night.

While Washington’s (10-4, 6-2 2A ECC) bats struggled to put together five hits in the game, starting pitcher Logan Everette was busy shutting down the Hawks (12-3, 5-3 2A ECC). In 5.2 innings of work, the senior surrendered two runs — one earned — on one hit and struck out 13 batters. Mason Weaver pitched an inning of relief, allowing five runs — four earned — on four hits, while picking up three strikeouts.

North Lenoir led for most of the game, scoring a run in the third and fourth before Washington got one back in the fifth. Up 2-1, North Lenoir scored five runs in the seventh and the Pam Pack managed only a run in the bottom of the inning.

CHOCOWINITY — Not much went right for the Southside baseball team last night. The Seahawks struggled at the plate, in the field and on the mound in an 11-1 loss at home in six innings to Tarboro, a team it previously defeated by five runs.

Southside (6-7, 3-4 1A CPC) fell behind early, surrendering three runs to the Vikings (8-7, 5-3 1A CPC) in the top of the first and never recovered. The Seahawks managed to score in the bottom of the frame, thanks to an RBI-single from Will Warren, but that was Southside’s only hit in the game.

Stringing together eight hits, drawing seven walks and taking advantage of four Seahawk errors, Tarboro scored two more runs in the second, four in the third and two more in the sixth.

WASHINGTON — Despite peppering Edenton’s goal with shot after shot, Washington found itself tied at a goal apiece with the... read more