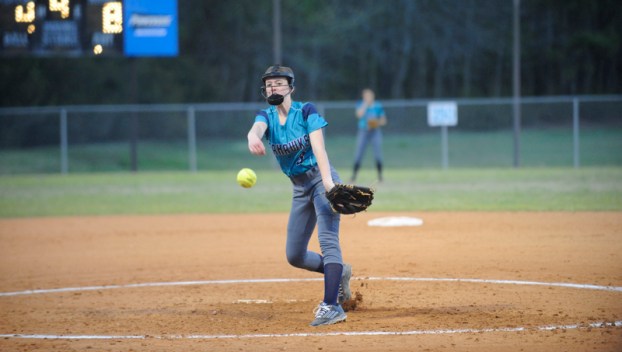 FIRE IT IN: Southside pitcher Alexis Whitehurst throws a pitch to a Viking batter during yesterday’s loss to Tarboro. (Sean Finnerty | Daily News)

CHOCOWINITY — When Southside and Tarboro met earlier this season at Tarboro, the Seahawks came away with a commanding 14-0 victory. And after Southside went ahead by six runs through the first two innings of yesterday’s rematch in Chocowinity, it looked like it’d be a repeat performance.

But the Vikings had other ideas, as they tied last night’s game in the top of the fifth before pulling away in the final two innings to hand Southside a 16-9 loss.

While acknowledging Tarboro’s obvious improvement, Southside head coach Kam Rouse said the Seahawks (7-6, 2-5 1A Coastal Plains Conference) were undone by a few untimely errors and allowing some questionable calls by the umpire get in their heads.

“They (the Vikings) obviously got better and we hit the ball like we did last time, but they just made the plays tonight. We made a couple of costly errors and didn’t get calls that didn’t go our way. Every close call by the umpire went to them and didn’t go in our favor,” Rouse said. “Once we had the lead, we got a couple of bad calls from the officials, and I think that got into my girls’ (heads). And once they came back, they got the momentum and kept it coming.”

The game couldn’t have started much better for Southside, as Laura Hodges led off the bottom of the first with a triple and was driven home by an Alexis Whitehurst groundout. The Seahawks scored two more runs in the inning, thanks to a Shantel Cannon single with the bases loaded and a drawn walk by Madison Easly the next at-bat.

The bottom of the next frame started the same way, as Laura Hodges, who led the Seahawks with four hits and three runs scored, led off with another triple. Whitehurst once again drove her home with a groundout to make the score 4-0. RBI-singles from Mallory Nobles and Morgan Dixon pushed Southside’s lead to 6-0 by the end of the second.

Tarboro (7-6, 4-3 1A CPC) finally got going at the plate in the third, scoring four runs. Southside committed errors during the first three at-bats of the stanza, scoring a run for the Vikings and leaving runners on second and third. A base hit and groundout drove home three more runs for Tarboro, making the score 6-4.

Southside responded with two runs in the bottom of the third, thanks to a Talia Askew single that drove home Whitehurst and Marah Gottwalt. But with the score now 8-4, the Seahawks went cold at the plate, recording four more hits through the final four innings.

The Vikings on the other hand, were just getting going, scoring three runs in the fourth and another in the fifth to tie the game at 8-8. Gottwalt tripled to left field in the bottom of the fifth to temporarily give Southside the lead back, but scored five runs in the sixth and three more in the seventh on eight hits to pull away.

The Seahawks will not be pleased with losing in such fashion to an opponent it already defeated in convincing fashion, but they will have another shot at Tarboro. The teams will face off again April 22 in the Lady Vikings Easter Softball Tournament, which Rouse said will be the tiebreaker between the two squads.

The Seahawks will look to bounce back tomorrow’s when they welcome Pamlico County to Southside at 6 p.m.