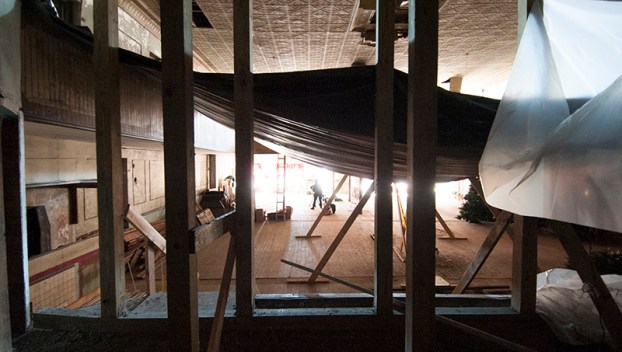 IN DANGER: The roof of the Turnage Theatre is in imminent danger of failing due to its age, damage by recent hurricanes and the unusual amount of rainfall this year. (Vail Stewart Rumley/Daily News)

After debate, city provides Arts of Pamlico with roof funds

In a split vote Monday, the Washington City Council agreed by a margin of 3-2 to provide Arts of the Pamlico with $50,000 to help stabilize the failing roof of the 106-year-old Turnage Theatre.

AOP Executive Director Debra Torrence appeared before the board to make the request, making the case that the theatre is a significant economic and artistic incubator for both the city and Beaufort County as a whole.

“We need your help now to keep our roof literally on top of the theater,” Torrence said. “The restorations in the mid-2000s did not address the structure of the 1910s-era roof, which is breaking down at an accelerated rate, thanks to the steady deluges of rain we have all experienced.”

Torrence went on to say that more and more leaks have been popping up in the theater, and that the roof is in imminent danger of failing. A structural study conducted last fall by engineer Curtis McLawhorn showed the extent of the damage. While the council ultimately granted the request, the funds were not given unanimously or without debate.

Councilmen William Pitt and Doug Mercer spoke in favor of holding off until the council had a chance to examine the proposed 2019-20 budget.

“I certainly support the efforts to repair the roof,” Mercer said. “But at the same time, we’re getting ready to get a budget for next year that is projecting a 5-cent tax increase, which may or may not stay in the budget. I would like to recommend to the council that we sit on this until we go through our budget workshop. We’ll be back in May, can tell them where we stand, and we may have more than $50,000 we can allocate.”

Meanwhile, Mayor Mac Hodges, along with council members Virginia Finnerty and Roland Wyman, who serves on the AOP executive board, advocated for immediately providing the funds, which totals a tenth of the funds needed to repair the roof.

“I think what we’re seeing here is an opportunity cost,” Wyman said. “A commitment tonight would make a huge difference.”

After considerable discussion, Councilman Richard Brooks made the motion to grant the request and was the deciding vote on the matter. He did so based on the understanding that the request would be non-recurring and that the estimate of $500,000 would be sufficient to complete the work.

In addition to the funds provided by the city, AOP has raised $130,000, for a grand total of $180,000 so far. The $50,000 provided by the city will also be used to leverage matching funds from the Eddie Smith Family Foundation. If AOP can raise an additional $25,000 between now and May, the Foundation will provide $75,000 toward the project. The organization has applied for a variety of grant funds from other sources.

In May, AOP will address the Beaufort County Board of Commissioners with a similar request for $50,000. For more information on the AOP Raise the Roof campaign, visit www.artsofthepamlico.org/raise-the-roof.

A 5-cent tax increase included in the City of Washington’s proposed 2019-20 budget largely depends on how the City Council... read more