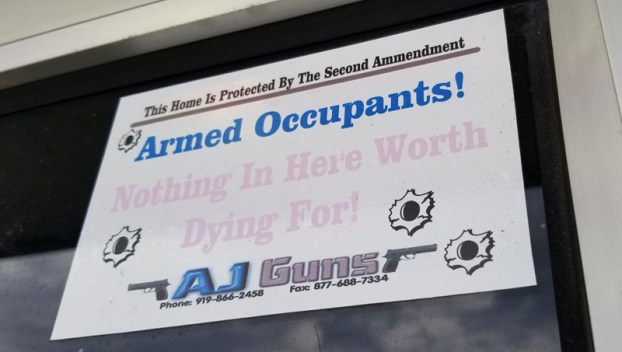 Washington’s Board of Adjustment unanimously voted to uphold the zoning violation of sweepstakes-vape shop Players Vape in a meeting that started on Thursday evening and did not end until Friday morning.

“It was a long, tedious process. Just like being in court, is exactly what it was,” Fuchs said.

Players Vape came to the public’s attention recently because of a March 25 shooting, in which an armed robber, Grant Waters of Rocky Mount, was shot and killed by a Players Vape employee. However, the business caught the eye of city planning officials in January when they realized a discrepancy: the city had been told the nature of the business was a Vape store, and had omitted the presence of sweepstakes games on the premises altogether, Fuchs said.

“On the application it was never mentioned, and when the city received some complaints, the city went down there and looked into it,” Fuchs said.

Fuchs said what officials found was little actual VAPE merchandise and a lot of sweepstakes games — about $65,000-worth.

“Was it a vape shop and the games an auxiliary use? Or was it a game place and the vape (merchandise) auxiliary? Common sense tells me, you need to ask the question: ‘Is that allowed?’ And nobody asked that question. They stated last night they had 42 machines in there. Somebody was trying to get over on the city, to me,” Fuchs said. “They could have worked with the city. Instead of asking permission, now they’ve come back — and as the old saying goes — now they’re trying to ask forgiveness.”

Fuchs said, while many of the games at Players Vape are considered “games of skill,” there was at least one that he felt crossed a line.

Players Vape attorney Keith Anthony, of the Durham-based Morningstar Law Group, does not agree with the board’s findings.

“We appreciate the service of the Board members and their willingness to stay until after 4 a.m. this morning to conduct the hearing,” Anthony said Friday afternoon by email. “However, we disagree with the Board’s ruling.”

Anthony said the matter should not have been in front of the Board of Adjustment at all.

“We also logged numerous objections to the manner in which the hearing was conducted, including that the matter should not have been before the Board as a result of the City’s Director of Community and Cultural Services admitting under oath that the purported notices of violations issued by the City to Players Vape were not valid because they did not comply with the City’s code,” he wrote.

Fuchs explained Anthony was referring to the fact that the notice of violations the city sent to Players Vape in January should have, but did not, list the actual state statute the business was violating.

“That was basically a harmless error,” Fuchs said. “It wasn’t done out of malice; it was an error.”

As the Board of Adjustment is a quasi-judicial board, its decision will stand unless it’s appealed and overturned in Superior Court — an action that Anthony did not rule out on Friday.

“Players Vape intends to pursue these matters wherever they take us,” Anthony wrote.

Board of Adjustment member Stan Friedman said he wouldn’t doubt that, based on the quality of the Players Vape representation, that the case could be used to set a precedent in the state on the legality of such games and establishments.

“My feeling was that it’s a gambling operation,” Friedman said. “I was in law enforcement — you go out there and you see that they had the windows covered; there was $60,000 (of machines). You’re not going to put that kind of money out unless you’re getting a big return. …

The issue is big. It’s huge. There’s a lot of money involved. That’s why there’s crime too there, by the way. People know that’s where the money’s at.”

Just a week before the shooting at Players Vape, another set of armed robbers got away with about $9,000 from the same store in a more successful robbery attempt.

Fuchs said he was pleased with the outcome, if not the sleepless night for the all-volunteer Board of Adjustment.

“I commend our board for hanging in there, listening and taking notes and making the best decision they could make,” Fuchs said. “I thought they all did an excellent job; everyone who was involved on the city side, they did a great job. (City attorney) Franz Holscher, he did an excellent job in presenting the city’s case.”

After debate, city provides Arts of Pamlico with roof funds

In a split vote Monday, the Washington City Council agreed by a margin of 3-2 to provide Arts of the... read more