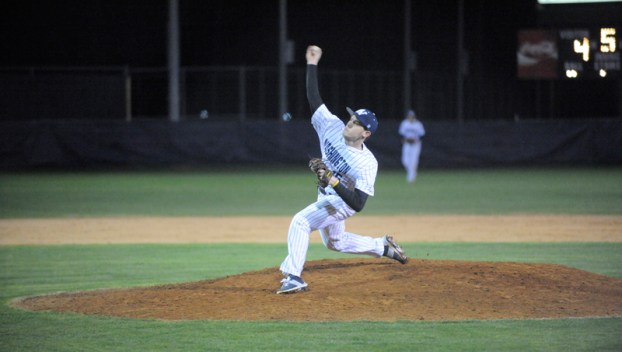 ROUGH NIGHT: Washington’s Tyler Rowe throws a pitch earlier this season. Rowe made a relief appearance during Wednesday’s game at Riverside, but he couldn’t stem the tide as the Pam Pack went on to lose 13-0. (Sean Finnerty | Daily News)

WILLIAMSTON — The Pam Pack couldn’t silence the Riverside bats last night, as the Knights used a 10-run fourth inning to win the game, 13-0, in five innings.

Riverside (15-2, 9-0 1A Coastal Plains Conference) pushed across runs in each of the first three frames with textbook baseball. Getting runners on base, moving them over to second and third with less than two outs and putting the ball in play to chase them home.

Washington’s (12-5, 8-2 2A Eastern Carolina Conference) only two hits came from Hunter Hall, one of which came when he looped a hit that dropped down on the edge of the infield in the top of the fourth inning, despite a diving effort from the Knights’ left fielder.

In the bottom of the fourth, Riverside strolled every batter in the lineup to the plate. All batters reached base safely and scored before the Pam Pack recorded an out. Five doubles, five singles, an error and 10 runs were tallied in the inning for the Knights.

Washington went down quietly in their last chance in the top of the fifth inning. Pam Pack head coach Kevin Leggett was displeased with the team’s effort last night.

The Pam Pack didn’t start either of their best pitchers — Hall and Logan Everette — against the Knights. They will be available to pitch during the upcoming Easter tournament this weekend being held at Washington. Teams that will participate in the tournament are as follows — host Washington, Southside, Northside, Bear Grass, Mattamuskeet, South Creek, Columbia and Bertie. The first game for the Pam Pack is slated for Saturday against South Creek. First pitch is set for 11:15 a.m.

“I just hope that they’ll step up for some of the games,” Leggett said. “We may be playing teams that aren’t as good as the team we played tonight, so hopefully they’ll get up for some of those games. We have to learn we have to get up for every game and not just the big ones.”

Despite the loss, Washington still leads the 2A ECC standings by a half game with its wins over Ayden-Grifton and South Lenoir last week. There are only two remaining division games left for the Pam Pack, as match-ups against Kinston and West Craven loom after the Easter tournament and Beaufort County Schools’ spring break next week.

LA GRANGE — Losing 12 seniors from last year’s squad, having just one senior this season and several other team... read more