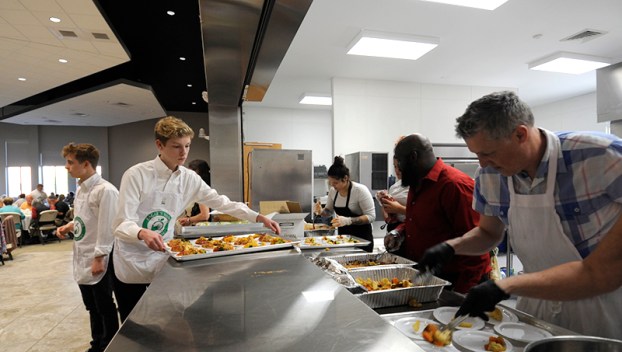 Iron ‘Eagle’ Chef make most of fundraising with culinary competition

Foodies be warned. Iron “Eagle” Chef is back for a third year, and this time, the competition will be fierce — for a cause.

The April 30 fundraiser for Eagle’s Wings Food Pantry in Washington starts with appetizers and ends with dessert. In between are a silent auction, a wine auction and the culmination of a culinary challenge to three local chefs: use this secret ingredient to make a meal that will please the palates of three local judges. Winner gets bragging rights, a plaque and the gratitude of those behind the food pantry, such as Executive Director Ann-Marie Montague, Eagle’s Wings Board of Trustees President Bob Boulden and board member Henry Capogna.

“The creativity of the individual chefs is always very interesting and amazing. And it gives them opportunity to show their culinary skills,” Montague said.

They’ll also win the appreciation of satisfied diners who’ll receive small meals, one from each chef.

“I think there’s a misperception because people see small plates of food, but they’re really three small meals. You walk out of there, you will not be hungry,” Capogna laughed.

Chefs learned the secret ingredient they’d be required to use last week, Montague said, but those with tickets to the fundraiser won’t know what the menu holds until (three small dinners) are served. Last year’s secret ingredient was sweet potatoes; the year before, black beans.

“There’s a new secret ingredient, but we don’t tell the world that,” Boulden said.

Boulden said the results from the chefs are always interesting, as each chef has a different background.

“I think we have a diverse group of chefs. We have The Hackney, Open Heart Country Kitchen, and Backwater Jack’s. They’re totally different, and coming up with something people like, it really challenges their expertise,” Boulden said. “(The secret ingredient) might be a garnish; it might be an integral part of it. It’s up to them.”

Eagle’s Wings relies on its fundraisers, donations and volunteers to keep those in need fed in Beaufort County. More than 100 volunteers logged 15,500 hours in 2018, which is the equivalent of $480,000 in payroll. Iron “Eagle” Chef has brought in about $15,000 for the past two years.

“The dollars we make here result in 40 tons of food,” Capogna said.

That 40 tons of food represents eight to 10 weeks of food distributed by Eagle’s Wings — food purchased through the Food Bank of the Albemarle at a discount of $5-worth of food for every dollar. It’s also used to support several Eagle’s Wings programs: Client’s Choice Pantry, which provided more than 3,000 clients with grocery selection; groceries delivered monthly to more than 80 clients who cannot get to Eagle’s Wings due to medical reasons; a monthly mobile food pantry serving more than 200 families south of the Pamlico River; a backpack program in which more 140 students each week take home a backpack stocked with two meals for the weekend; and a new program, the South Satellite, which serves clients in Aurora and Edward, specifically.

“We go south of the river three times a month. That allows us to go into the communities where people don’t have the access to us for food. That’s where our most vulnerable citizens live,” Montague said. “They have the lowest per capita income in the county, and lack resources — no grocery stores. It’s a totally food-insecure area. It’s a food desert.”

Of Eagle’s Wings many clients, those who participate in the programs are not who you think they are, according to Montague.

“Twenty percent of our clients are seniors living solely on Social Security, 20% are living on disability and 30% are children under the age of 17,” Montague said. “There’s 70% of the whole client base who you don’t basically have to vet.”

With fundraisers like Iron “Eagle” Chef, more people are exposed to the role of Eagle’s Wings for those in need.

“We reach out to folks that we don’t generally see in the community. We can show them things we do, and talk to them about things they can do to help us and drum up some new volunteers or board members. Plus it’s just fun to eat,” Boulden said.

For more information about Iron “Eagle” Chef or to purchase tickets for the event, call Eagle’s Wings Food Pantry at 252-975-1138. Tickets are also for sale at the Washington-Beaufort County Chamber of Commerce on Stewart Parkway. Tickets are $35 per person. The event will be held at First Christian Church in Washington.

Correction: This article has been corrected to reflect the date of the Iron “Eagle” Chef competition. The event is on April 30.