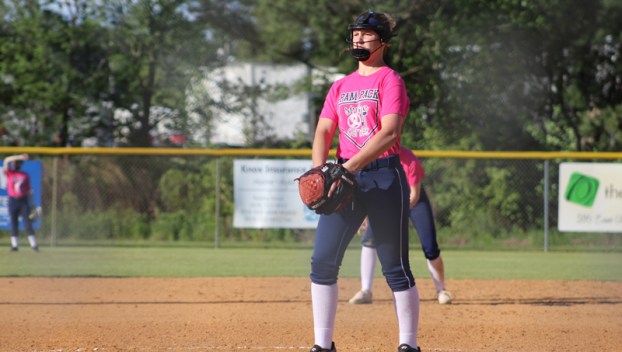 WHAT A RELIEF: Washington pitcher Savanna Craft prepares to throw a pitch during a game in the Lady Vikings Easter Softball Tournament on Saturday. Craft picked up a pair of wins in relief for starting pitcher Abbi Tucker, as the Pam Pack won all three of its games. (Laieke Abebe)

WINTERVILLE — Intangibles such as resolve, playing until the final out and toughness were on display when Washington traveled to Winterville on Saturday to play in the Lady Vikings Easter Softball Tournament. Although it nearly lost twice, the Pam Pack came away with three wins at the Sara Law Softball Complex. Washington won 4-3 over Topsail, 4-3 over Bear Grass Charter in walk-off fashion and 9-0 over Midway.

“I think we’ve struggled recently,” said Pam Pack head coach Doug Whitehead. “So having an opportunity to face good teams at an event like this really helps. We played good defense for the most part, and I’m really pleased with our fight and resolve. Now, we can get some rest over the holiday break, and it’s great to pick up three wins against some excellent teams.”

A 9-0 win over Midway (11-5, 9-1 2A East Central Conference) was a nice end to what was a wild day of softball for the Pam Pack (17-0, 10-0 2A Eastern Carolina Conference). It all started with an Emme Davis triple, followed by Kaylee Elks reaching on an error that scored Davis to make it 1-0 in the bottom of the first.

In the bottom of the fourth, Summer Campbell hit a two-run double with the bases loaded after Grace Paszt walked and Macie Main bunted for a single. Desiree Maurizzio had an RBI sacrifice bunt to make it 4-0 Pam Pack. The highlight of the game came in the bottom of the fifth inning when Kaylee Elks hit a solo home run that cleared the scoreboard in left field.

“Coach (Whitehead) told me to hit it hard,” Elks said. “I’ve been struggling lately, so I just had to make contact and it felt good. It was a long day and I think we could’ve hit better, but it’s good to come out with three wins.”

Infield singles were the theme in the bottom of the sixth inning. Leah Spencer and Campbell each had one to start the frame. Maurizzio hit an RBI-single and Davis plated two runs after a throwing error to make it 8-0. Paszt provided the final RBI on a fielders’ choice.

There were several close calls for the Washington Pam Pack throughout the day. Trailing 3-1, Whitehead’s team was down to its final strike in the top of the seventh against Topsail (13-3, 8-2 3A Mideastern Conference) in its first game. However, a Sydney Keech fly ball to center field caused two Pirate outfielders to run into each other and drop what would’ve been the final out.

The Pam Pack would’ve lost its undefeated season, but instead two runs scored to tie the game. After Keech advanced to second on the error, Main drove in Keech with a ground ball to second to complete a 4-3 comeback victory.

“We strung our hits together,” Campbell said after the first game. “It wasn’t pretty, but it worked out for us and we took it and ran with it.

Washington was once again down 3-1 in its second game against Bear Grass (13-4, 6-0 1A Atlantic 5 Conference). Davis’ home run to left field in the first inning was the only scoring of the game for the Pam Pack until the bottom of the sixth. Campbell started the inning with a single and Desiree Maurizzio reached on a bunt as well. Then, Davis forced an error from the Bears infield that scored both runners to tie the game.

In the bottom of the seventh, Maurizzio stepped up to the plate with the bases loaded. She hit the ball deep enough to right field to score the winning run with a sacrifice fly for another 4-3 victory, the second win of the day after trailing late.

“We like to keep it interesting,” Maurizzio said. “It’s always been like that with us and we’re used to being under pressure. I’d been popping up all day at the plate, so I knew if I hit it in the right spot, we’d get the run home.”

Washington is off for spring break until April 30, when it hosts Kinston for Senior Night at 6 p.m.