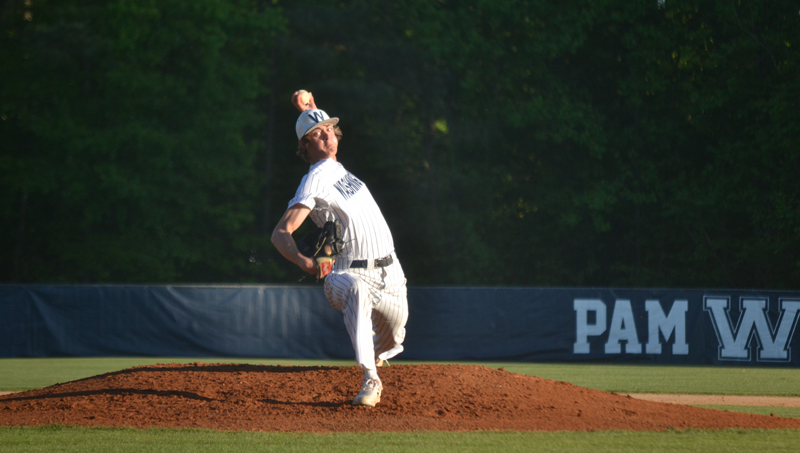 BRINGING THE HEAT: The Pam Pack’s Logan Everette fires in a pitch during yesterday’s win over Bear Grass in the Washington Easter Tournament championship game. The senior was on top of his game, striking out 14 Bears in six innings of work. (Mitchell Thomas | Daily News)

WASHINGTON — An absolute gem of a performance on the mound from Logan Everette and a two-run home run from Robert Pollock propelled the host Pam Pack to a championship victory over Bear Grass, 5-2, last night in the Washington Easter Tournament.

Washington (14-5, 8-2 2A Eastern Carolina Conference), which played as the away team in the championship game, got things started in the top of the first when Mason Weaver laced a double down the right field line. Hunter Hall matched the sophomore’s efforts with a double to left field, scoring Weaver to take an early 1-0 lead.

For the Pam Pack, it was the Everette show last night. The Campbell University signee had his future coach in attendance for his six full innings of work, in which he hurled 14 strikeouts, allowed two runs on five hits and issued only one walk.

“Just pounding the zone with my fastball,” Everette said about his success on the mound. “Used my fastball — they couldn’t touch it; they were behind it. The offense came in, got some hits, gave me some confidence. Without them, I would’ve stressed a little bit.”

The Washington offense came up big when it was needed the most. With a runner on base in the third, sophomore catcher Robert Pollock took a 2-2 pitch deep over the right field fence, disappearing into the trees to give the Pam Pack a 4-0 lead.

“It felt great, really. Was nice to get this one done for the boys. We needed a good win,” Pollock said. “I was fouling off some fastballs; I didn’t think I was going to see anything off speed. I was really just trying to get on base, but I caught the ball right and it just went.”

It wasn’t until the sixth when Pam Pack fans scooted to the edge of their seats, as Bear Grass (20-2, 8-0 1A Atlantic 5 Conference) strung together a couple of big hits. Tanner Lyle singled, Donald Stotesbury tripled to right-center to score Lyle, and Jordan Leggett doubled to left center, bringing Stotesbury home to cut Washington’s lead to 4-2. But Everette struck out the next two batters to preserve his team’s lead.

“Logan pitched great. When he’s pitching like that, we’re hard to beat,” Pam Pack head coach Kevin Leggett said. “Gotta keep the intensity up. They were up for each other tonight. That big home run by Robert got them excited too. A few more of those and that’ll keep the excitement level way up.”

Despite the loss, Bear Grass head coach Terry Perry showed optimism heading into the Bears’ matchup tomorrow with New Jersey’s Manalapan High School, which MaxPreps ranks as the No. 8 team in the Garden State.

“We didn’t hit the ball as well as I thought. They weren’t seeing the ball good today; they didn’t hit good in the first game either,” Perry said. “I chose not to go with my (number) one (pitcher) today. I wanted to make sure I had him for Thursday (against Manalapan).”

Washington will have the week off before they host Kinston on April 30 for Senior Night. First pitch is set for 7 p.m.