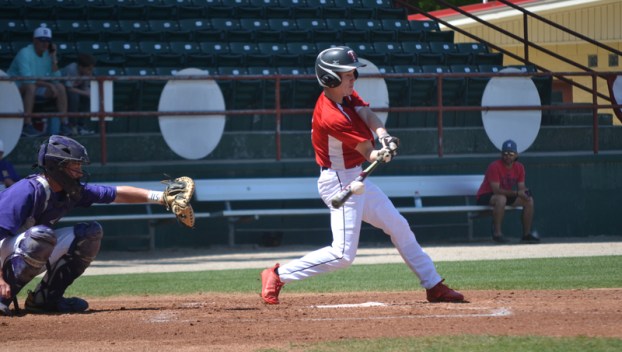 ROUGH OUTING: TEACH Senior second baseman Stephen Trainor connects for a hard hit ball to the shortstop in their 13-1 loss to Rosewood Tuesday afternoon at Fleming Stadium in Wilson. The Trailblazers only managed four hits on the afternoon. (Mitchell Thomas | Daily News)

Trailblazers unable to slow down Rosewood

WILSON — Without some of its primary starting pitchers, the Eastern Christian HomeSchool Trailblazers couldn’t halt the hot bats of Rosewood yesterday afternoon, falling 13-1 at Fleming Stadium — home of the Tobs — in Wilson.

TEACH (13-5) didn’t run short of confidence in the batter’s box, swinging at pitches early and often in the count and being aggressive. The Trailblazers entered yesterday’s game coming off of three games in which they scored 33 runs, but that wasn’t the case against a Rosewood (16-3, 10-0 1A Carolina Conference) team that has continued to hit well all year. The Eagles have managed to score 10-plus runs in 14 of their 19 contests this season.

After TEACH starting pitcher David Valerioti blanked the Eagles in the first frame, Rosewood wouldn’t go another inning without scoring at least two runs. The freshman Trailblazer threw strikes, limiting walks and allowing his defense to make plays, but Rosewood found too many gaps.

In the second inning, Rosewood got a couple runners on base by way of a single and a walk, and the leadoff batter Logan Price brought them all home on a triple that nearly left the yard in left-center field. The next batter, Will Harris, brought home Price with a single to left.

TEACH would get one back, as Nick Jones led off the second by letting an inside curveball bounce off his wrist. A perfect sacrifice bunt down the first base line by Ryan Ange moved Jones to second, then singles by Preston Kennedy and Jacob Whitesell pushed Jones across to score the Trailblazers’ lone run of the day.

TEACH first baseman Jones reached safely in both of his at-bats, poking a single into centerfield in the third to go along with his hit-by-pitch and run scored.

“Just swing the bat, and I guess get lucky every once in a while,” Jones said about his offensive approach. “Going forward, we just have to put these losses out of our head and focus on the games ahead. Focus on having better at-bats, more solid defense, put in some more practice between now and next game.”

The Trailblazers had middle school baseball coach Jamie Martin filling in for TEACH head baseball coach Donell Albritton, who was absent on account of a personal family matter. Martin was disappointed in the result.

“We were missing a couple of our starters, so we weren’t going to shut them down by any means,” Martin said. “We wanted to hold our own with them, but we just didn’t play clean defense. You can’t give that team any type of freebies, and I feel like we did.”

TEACH, which doesn’t belong to a conference and thus ineligible for a postseason tournament, will wrap up its season by traveling to Rocky Mount to face Faith Christian on Tuesday. First pitch is set for 5 p.m.

By MITCHELL THOMAS Washington Daily News WASHINGTON — An absolute gem of a performance on the mound from Logan Everette... read more