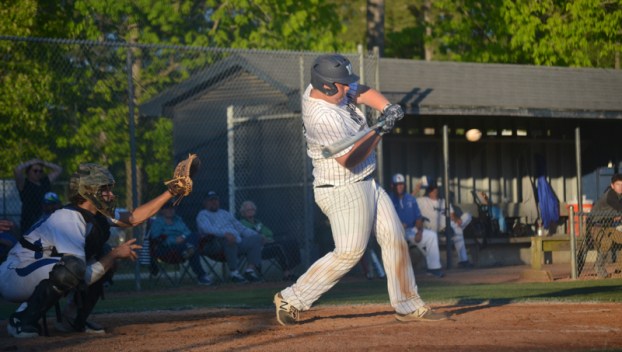 SLUGGING AWAY: Washington’s Robert Pollock swings away during Monday’s championship game of the Washington Easter Tournament. Pollock had himself quite the tournament, driving home six runs, while blasting a home run and belting a pair of doubles. (Mitchell Thomas | Daily News)

By SEAN FINNERTY and MITCHELL THOMAS

Beaufort County schools are currently on hiatus for spring break. But before getting the chance to relax and enjoy some downtime away from the classroom, local baseball and softball players hit the ball fields to compete in various Easter Tournaments, which opened play last Saturday before wrapping up on Monday.

The Pam Pack baseball team played the role of host this year, inviting seven other teams to participate in the Washington Easter Tournament. Washington proved to be the cream of the crop at the event. The Pam Pack began by defeating Southside, 8-0, after original opponent South Creek didn’t have enough players to compete, and followed up with a 5-2 victory over Bear Grass — ranked No. 5 out of all 1A teams in the state by MaxPreps — in the championship game.

The Seahawks kicked off the tournament by defeating Bertie, 5-4, scoring all of their runs in the first inning before holding off the Falcons for the win. With South Creek not able to play, Southside ended up playing Washington immediately after its win over Bertie, resulting in a loss to the tournament host.

Similarly, Northside finished 1-1 at the tournament, opening with a 13-3 win over Columbia. The Panthers then played Bear Grass with a spot in the championship game on the line, but fell, 8-6, after their late rally fell just short.

The Washington softball team was also in action, taking part in the Lady Vikings Easter Softball Tournament in Winterville. The Pam Pack had a marathon of a day on Saturday, playing three games against teams all ranked in the Top 100 in the state, in Topsail (No. 10), Bear Grass (No. 85) and Midway (No. 78). Washington came out unscathed with its undefeated record still intact, defeating both Topsail and Bear Grass 4-3, before wrapping up its day with a 9-0 victory over Midway. Even more impressive, the Pam Pack trailed both Topsail and Bear Grass heading into the final inning.

Here are the individual standouts from the Easter tournaments:

With a dominant performance on the hill in Monday night’s Pam Pack Easter Tournament championship game, Logan Everette struck out 14 Bear Grass batters in a 5-2 victory. With his future coach from Campbell University looking on, Everette got the job done. The senior posted a 2.33 ERA in his six innings of work. He surrendered only five hits, two runs and a walk, to go along with his two runs scored from his two free passes to first base on the offensive side. In game one of the tournament, Everette contributed to an 8-0 win over Southside with a 2-for-3 day, having two RBIs and a run scored.

Bring the tape measure out. In Washington’s Easter Tournament championship victory over Bear Grass, Robert Pollock played a huge role in the win, as he crushed a 2-2 pitch that sailed through the woods over the right field fence. The two-run shot gave the Pam Pack a comfortable 4-0 lead in the third inning. In the first game of the tournament, Pollock went 3-for-3 with two doubles and four RBIs in Washington’s 8-0 victory over Southside, giving him six RBIs for the tournament.

The Seahawks won their first game of the tournament, thanks to a five-run first inning, and it was a monstrous swing of the bat by Johnathan Hernandez that ended up being the difference between Southside and Bertie. The junior belted a three-run home run in the opening frame, giving the Seahawks a 5-1 lead. It proved crucial, as the Falcons ended up scoring four runs. Hernandez ended the game with two hits and three RBIs, both game-highs, and followed by being one of six Seahawks to record a hit against Washington, while also drawing two walks. 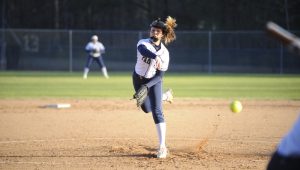 Pam Pack ace Abbi Tucker might have only picked up one win from the Easter tournament, but that was more due to her teammates producing at the plate late in games, and not Tucker being off her game. Never surrendering more than two earned runs in a game, Tucker’s performances allowed her teammates to finally get into a rhythm at the plate and push across the winning runs late in the first two wins of the day.

In 14 innings pitched, the junior surrendered five runs, three of which were earned, on six hits, while racking up 19 strikeouts.

Having scored less than five runs in a game just twice this season heading into the Easter Tournament, Washington’s offense experienced a couple of slow games at the plate, before exploding for nine runs in the final game of the day. Despite this, Emme Davis still found a way to be productive at the plate, tying for the team lead with four hits through the three games. Davis was a perfect 2-for-2 in the win against Bear Grass, blasting a solo home run in the first inning to get the Pam Pack going. Davis followed that by going 2-for-4 in the romp over Midway. Scoring two runs and driving home another run in the game, the junior laced a triple in the opening inning and was driven home to once again jumpstart Washington’s offense.

In a couple of games that required a team effort, Carter Boyd was a standout for his performance on the bump in Northside’s 13-3 victory over Columbia in the Panthers’ first contest of the Washington Easter Tournament.

Boyd earned the win, relying on his defense a bit, as he hurled five complete innings, surrendering three runs on five hits, but was supported by an offense that took advantage of some mistakes. Boyd also drew two walks at the plate and scored two runs in the first game. He continued his production at the plate against Bear Grass, as he singled to center field and later scored from Ryan Cornelius’ two-RBI single. Boyd, who was playing behind the plate in game two, also threw out a runner trying to steal.

By MITCHELL THOMAS Washington Daily News WASHINGTON — An absolute gem of a performance on the mound from Logan Everette... read more