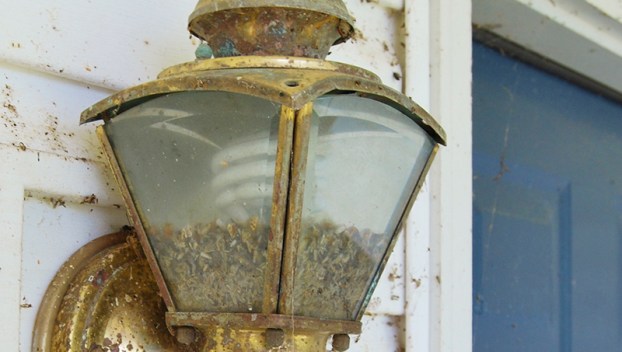 LIGHTS OUT: A porch light in Beaufort County is the final resting place for hundreds of fuzzy bills,  flying insects often mistaken for mosquitoes but which pose no health risk to humans, according to the Beaufort County Environmental Health Department. (Kevin Scott Cutler)

Those pesky insects may not be mosquitoes

They arrive in droves this time of the year, and while they may be a bit pesky they pose no harm to humans.

The bugs in question are not mosquitoes, said Eugene McRoy, environmental health specialist with the Beaufort County Environmental Health Department. They may look a bit like them, but that’s as far as the resemblance goes.

“We’ve been getting calls at the health department from people saying they had mosquitoes and inquiring about mosquito problems,” McRoy said. “Some people do know they aren’t mosquitoes, but there are some folks who don’t realize that.”

In fact, fuzzy bills don’t bite humans at all, “So there are no health issues with them whatsoever,” he added.

The insects are more of a nuisance than anything since, like mosquitoes, they are drawn to light. Leave a porch light burning and chances are you’ve created a haven for them. Taking your sweet time shutting an exterior door, and they’ll make themselves right at home.

McRoy said it’s understandable why some people confuse the two.

“It is hard to distinguish them by just looking at them as they’re flying,” he said. “But don’t worry about them; they are not a health threat.”

In fact, fuzzy bills are actually beneficial to the environment.

“They are part of the food chain and are an important food source for fish and predatory aquatic insects, such as dragonflies and diving beetles,” McRoy said, referencing a report published by N.C. State Extension. “Fuzzy bills lay their eggs on the surface of water, and the eggs then sink to the sediment in the bottom of rivers and ponds. They’ll hatch in two to seven weeks, depending on the water temperature.”

The adult insects have a life span of just three to five days, according to McRoy.

Little Washington Sailing School is getting some wind in its sails with a $32,512 grant from Duke Energy. LWSS is... read more