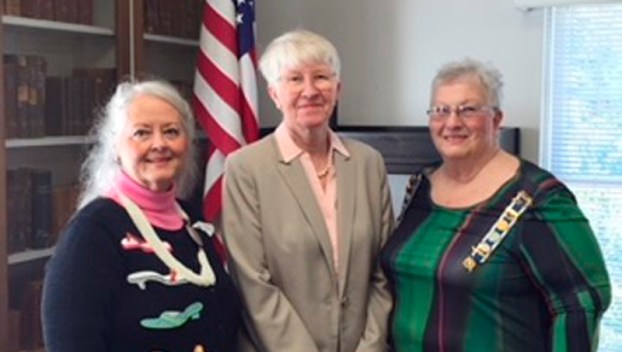 The Major Reading Blount Chapter of the Daughters of the American Revolution met April 17, at the Brown Library in Washington. Regent Reid Solomon called the meeting to order and led the DAR Ritual, the Pledge of Allegiance, American’s Creed and My DAR Pledge. Ten members were present with two guests. Chapter officers and committee chairmen presented reports.

The Flag Moment was presented by Anita Fletcher. She told of author Jane Hampton Cook’s five reasons we stand for the flag. First, we stand to remember those who lost their lives to defend the flag. Second, we stand because the flag is what unites us. Third, we stand to honor our elected president. Fourth, we stand to salute the principle of justice. And fifth, we stand to set an example for generations to come.

Vice Regent Connye Dillon introduced the speaker for the program, U.S. Army Col. Kathy Lynch Simpson (Ret.). She is a soldier and a veteran and served as an Army nurse in many capacities and in many places while being the wife of an Army officer and the mother of two sons. Simpson began her service in the orthopedics wing at Walter Reed Hospital in Washington, D.C., before quickly moving up to the VIP Suit, where she cared for officers and dignitaries. In this country, she worked at Army bases in San Antonio, Texas, Georgia, an oncology ward in South Carolina and a field hospital in Kentucky, as well as working in Germany. Her first wartime deployment was during Desert Storm, when she was head of the nursing staff. This was followed by her service at the Pentagon, on staff for the Surgeon General of the Army and during this time the 9-11 crisis occurred, leaving Simpson with many lasting memories. Finally, Simpson returned to Walter Reed Hospital to serve as the Chief of Nursing. She retired after 29 years of service in the Army. The motto of Army nurses is “Proud to care.”

Simpson reported that women make up 15% of the active force of the Army today, but remain an odd group and still not understood. The Army doesn’t look at a person’s gender but at what the person’s capabilities are. She appreciates DAR and what we represent.

The next DAR meeting will be on May 15 at Brown Library at 10:30 a.m. New officers will be installed.

Volunteering and the journey to dementia-friendly

There are many good reasons for volunteering, whether you want to give back to your community, aspire to develop a... read more