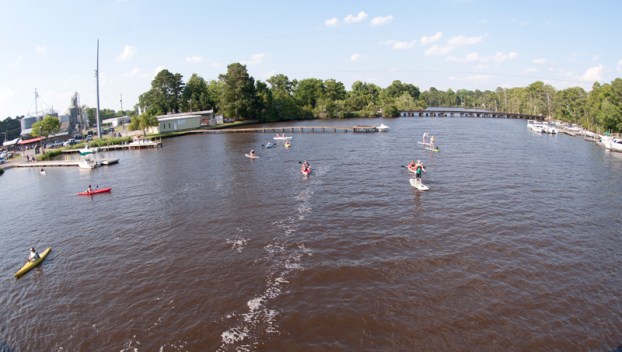 New rules for river would roll back pollution-preventing measures

The environmental rules meant to decrease pollution in the Pamlico and Neuse rivers aren’t working.

Since the 1990s, rules put in place by the state to cut back on nutrient pollution discharged into the rivers have been largely successful. The effort, however, has not resulted in the healthy waterways expected, with no end in sight for harmful algal blooms, fish kills and poor water quality.

Now the Environmental Management Commission rules are up for renewal, but the problem might get worse before it gets better, according to Tar-Pamlico riverkeeper Forrest English.
“The good news is that the rule now articulates that the department will assess why the rules aren’t working — try to evaluate what’s not working and propose a new path,” English said. “There’s at least an acknowledgment that what we’re doing right now isn’t working, so that’s a positive first step.”

The bad news is that while the Department of Environmental Quality will be searching for the reasons why the pollution measures haven’t worked, the rule omits a hard deadline for those findings and any new measures proposed to reduce harmful pollution. It also proposes rolling back some of the protections in place.

The nutrients in question are largely nitrogen and phosphorous, which do occur naturally, but also enter the waterways in greater quantities through wastewater treatment facilities, runoff from developments and farmland. The previous rule was put in place to reduce the nutrient load to the river by 30% and place caps on how much could be discharged in the waterways.

“For example the Tar-Pamlico: here’s the nutrient loads that we’re going to try to reduce by 30%, and once we get there, we’ll see if 30% is enough. But we’ve never reached that 30%,” English said.

Under the old rule, those who “over-polluted,” or exceeded their amount of nutrient discharge, were also required to offset that over-contribution through mitigation efforts, primarily buffer restoration — the planting of native trees, shrubs and grasses near the waterways to absorb excess nutrients found in runoff from agricultural lands or developments.

“Let’s say a plant has a 2-million-gallon-a-day discharge, so they would be going over their allocated part of the cap. If you want to exceed it, you have to mitigate for it. Currently, if you need to exceed your cap for some reason — which you can — but for every one unit you would have to purchase 2.1 (units) mitigation,” English said.

The new rule proposed would roll back the mitigation ratios for over-polluters, English said. The ratios now are 2.1 mitigation units to every 1 unit of additional discharge in the Tar-Pamlico; it’s a 2 to 1 ratio in the Neuse. The new proposal lowers that to 1.1 to 1 in non-monitored and 1 to 1 if monitored, and there’s no language in the rule defining the difference between monitored and non-monitored. English said the purpose of the rollback is to avoid putting a financial burden on those putting excess nutrients in the waterways while the state tries to figure out how to resolve the issue.

“What we’re doing isn’t working so why we would take a step backward in addition,” English said. “While we appreciate that’s it’s helpful to make it easier for the dischargers, we do think they can do both.”

According to a response from Sound Rivers to DEQ/Division of Water Resources, the standard mitigation offset ratio is higher: “Indeed, the vast majority of jurisdictions with established trading ratios … have set them at or above 2:1, with multiple jurisdictions setting the ratio at 3:1.”

English said setting the ratio so low for the Tar-Pamlico and Neuse rivers could draw unwanted attention from the EPA, which could, and has in the past, override a state’s ratio and replace it with its own, which could be much higher, according to English.

“By setting it so laughably low, I think the state is risking EPA intervention in a way the state might not enjoy,” English said.

While the proposed rules do make progress in acknowledging that these past reduction measures aren’t working and nutrient pollution is getting worse, English said more can be done, including by the general public. At actionnetwork.org/letters/north-carolina-rolling-back-nutrient-rules-to-benefit-polluters, anyone can write a letter to NCDEQ urging action.

“We would like the Environmental Management Commission to adopt rules that set clear deadlines for evaluation and proposing measures that will truly reduce nutrient loads,” English said. “We think part of that is avoiding the backsliding of ratios and offsets.”

Turnout in Beaufort County during the one-stop voting period for the 3rd Congressional district primary was underwhelming, according to Beaufort... read more