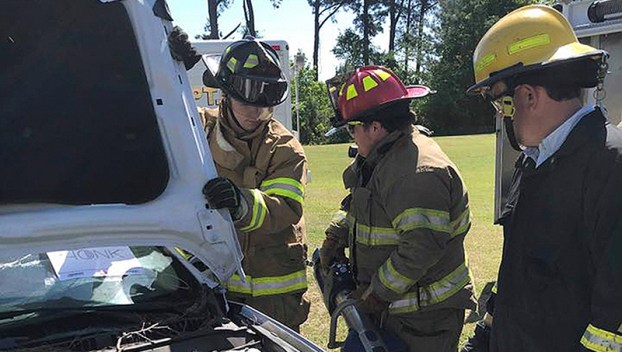 BLOUNTS CREEK — Just as cars seem to constantly get new designs, so does the hardware needed to cut someone out of those vehicles after an accident.

Blounts Creek Volunteer Fire Department got a crash course Saturday in the changes, not only on working around high-strength steel, airbags, advanced restraint systems, onboard technology and the critical parts of vehicles using alternative fuels, but in the equipment needed to cut through all of it to save a life.

It started with a PowerPoint presentation, according Blounts Creek Fire Chief David Williams.

“The PowerPoint was on new metals — they’re different than the ’70s and ’80s, they’re much stronger. This metal is more high-strength but lighter, and we have to learn new techniques to cut this metal, because all the old style low-pressure equipment won’t work on it,” Williams said.

Blounts Creek VFD’s low-pressure hydraulic tools were replaced with the battery operated eDRAULIC Jaws of Life last September. It did not take long to prove their worth, Williams said.

“We hadn’t had them four weeks when we had a collision that we had to use them — a head-on collision. We had to cut two people out,” Williams said.

The 50-plus people in attendance got to do the same Saturday, as after lunch, participants headed out to get some hands-on training.

“We learned dash roll techniques, took off doors, how to stabilize vehicles on their sides with strut systems,” Williams said. “So we tore a bunch of cars up.”

The practical experience is valuable, but there’s just as much value to be found in working side-by-side with other first responders, according to Williams.

“The value of teamwork, working with other departments, bringing all your resources together; the learning of new techniques that make it easier for us and quicker to get people out and to a trauma center. And there’s the safety aspect,” Williams said.

Williams said most of the instructors are MES employees, but they’re also firefighters, themselves. He said their efforts were appreciated by the participants.

“They spent their weekend with us when they didn’t have to, so we appreciate them coming,” Williams said.