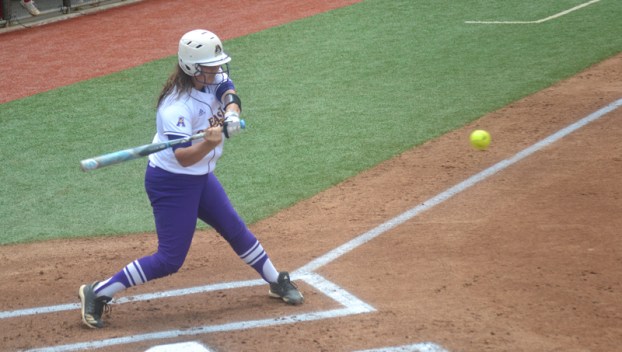 SMOKED: ECU’s third baseman Rachel McCollum sends a ball deep over the left-center field wall in the seventh inning of their 8-4 loss to UCONN on Sunday afternoon.(Mitchell Thomas | The Daily News)

BY: MITCHELL THOMAS | THE DAILY NEWS

GREENVILLE — A bottom of the seventh inning, three-run home run from Rachel McCollum wasn’t enough for ECU to overcome their 7-run deficit. Connecticut completes the series sweep of the Pirates on ECU’s Senior Day, 8-4.

In ECU’s final home series, the Pirates were out-scored by the Huskies 25-9. The Pirates fall to 21-27 and 3-15 in the American Athletic Conference.

UCONN (19-27, 7-11 AAC) and ECU swapped sacrifice flies to score a run a-piece in the third inning, but the Huskies opened it up in the fifth.

ECU’s starting pitcher Whitney Stanford twirled four strong innings with four strikeouts, but a couple of walks and an error put the Pirates in a bad spot in the to of the fifth. UCONN did damage with bases loaded and no outs, stringing together four consecutive singles and bringing home six runs in the frame to take a

Another UCONN RBI single in the top of the seventh gave the Huskies an 8-1 advantage. Despite trailing by a large margin, ECU would manage to bring the tying run to the plate in the inning.

After McCollum’s home run, Huskies starting pitcher Katie Koshes walked the next batter before handing it over to reliever, Jill Stockley. She would walk the next two ECU hitters to load the bases, but a pop-up to the second baseman and a strike out ended the game.

Despite the loss, ECU is graduating two seniors. Starting catcher Ashley Weingartz, along with right-handed pitcher and first baseman, Morgan Halo. Both seniors reached base twice on walks Sunday, but did not score.

ECU is a predominantly young squad, containing 11 freshman and sophomores with just six juniors. A year of experience for the younger players should serve well in the program’s future.

To take the place of the graduating seniors, ECU has two newcomers from Virginia in its 2019 recruiting class that will fulfill its biggest necessities. Logyn Estes, a pitcher from Madison County that was named high school 2A state player of the year last season and catcher Sophie Wools from Leesburg, VA who tallied 11 home runs in her senior year.

ECU will wrap up their regular season next weekend and travel to Houston (34-16, 10-7 AAC) to play the third-place Cougars. The AAC conference tournament will follow the next weekend, beginning May 9th.

GREENVILLE — East Carolina claimed its fifth American Athletic Conference series in as many tries over the weekend, as they... read more