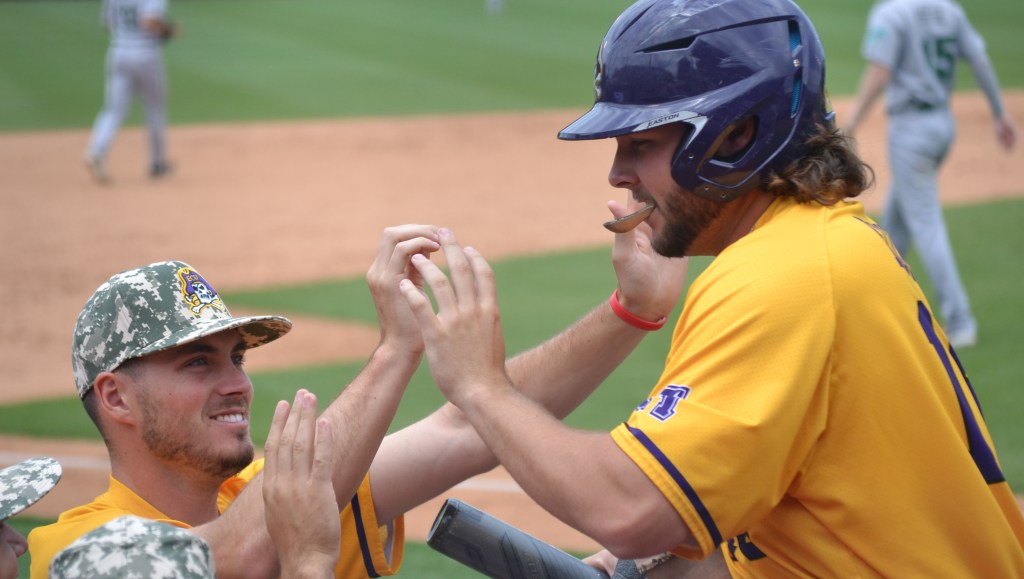 LIFTED UP: ECU’s sophomore right fielder and pitcher Alec Burleson is carried to the dugout by his teammates after scoring a run from his two-hit, five-RBI game on Sunday afternoon that included a three-run home run. (Mitchell Thomas | The Daily News)

GREENVILLE — East Carolina claimed its fifth American Athletic Conference series in as many tries over the weekend, as they take two-out-of-three games from second-place Tulane.

Tulane’s (27-16, 9-5 AAC) bats came to life Sunday after being relatively silent most of the weekend, as it scored nine runs and stifled two late Pirate comeback attempts in the 9-8 victory. ECU, (33-11, 13-2 AAC) loaded the bases in both the bottom of the eighth and ninth innings, but failed to plate any runs.

In the eighth, Tulane fanned Spencer Brickhouse before Alec Burleson grounded out to second to end the inning with the bases juiced.

In the ninth, Tulane nearly gave up the lead again, as two errors and a walk loaded the bases, but the Green Wave closer forced Ryder Giles into an game-ending double play.

“Our guys competed and that’s the staple of our program,” ECU head coach Cliff Godwin said. “But they played a little bit better than us, made a couple pitches and we didn’t get guys in from third base when we had less than two outs in the game.”

The bullpen failed the Pirates down the stretch as relievers Evan Voliva and Gavin Williams pitched just one inning combined and gave up five runs. Voliva was credited with the loss.

“The bullpen was a little shaky, but I think our offense put us in a position to win,” Packard said. “Key hits just didn’t go our way.”

However, despite the loss in the finale, ECU clinched its fifth-straight AAC series in a 8-2 win on Saturday behind 8.1 innings from Jake Kuchmaner. This is the third time he has pitched eight-plus innings, and the Pirates provided run support as it scored six runs through the first three innings. Kuchmaner finished with six hits, giving up two runs along with six strikeouts in his fourth win of the year.

Packard and Seth Caddell each had three hits on Saturday, as Lane Hoover and Brickhouse added two RBI’s a-piece. Giles had a multi-hit game with an RBI and similarly, one-RBI games from Packard, Burleson, and Turner Brown were turned in as well.

On Friday, after nearly a two-hour weather delay, the Pirates used a six-run third inning, and four separate two-run innings to put away Tulane, 14-0, in the opening game of the series.

Giles led off the third with a base hit and Packard sent him home with a two-run home run, ECU’s second of the game. Brickhouse was responsible for the other, as he knocked his team-leading 12th home run of the season in the first inning.

Doubles by Jake Washer and Brady Lloyd set up Dusty Baker’s single to bolster the offensive inning and ECU lead to 8-0.

“They’re leading a lot of categories in offense in the nation and we shut out a team like that,” Packard said.

The Pirates added two runs in the fourth, as Washer’s single scored Hoover and Brown’s squeeze-bunt scored Brickhouse from third. In the seventh, Connor Norby singled to right center to score Nick Barber. On the ensuing at-bat, Chandler Jenkins scored on a fielder’s choice.

In the eighth, pinch hitter Seth Caddell and Barber hit back-to-back home runs to cap the scoring. Barber’s home run was the first of his career.

ECU will travel to face the Cincinnati Bearcats (22-22, 11-7 AAC) in a three-game series next weekend.