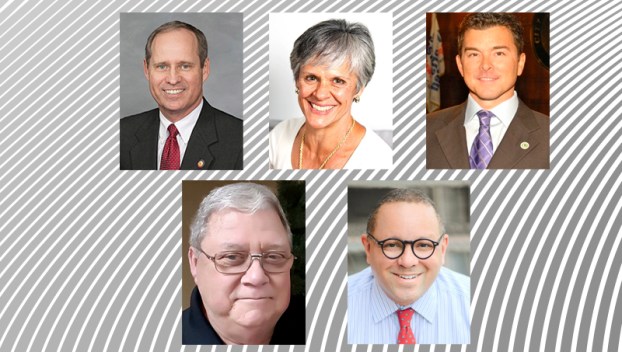 CANDIDATES: From 26 candidates who initially filed to run for the 3rd Congressional District seat, N.C. Representative Greg Murphy (top left) and Kinston physician Dr. Joan Perry (top center) topped the Republican field and are set up to face off in a runoff primary on July 9. Democrat Allen Thomas (right) secured his party's nomination with 50% of the Democratic vote district-wide. Constitution Party Candidate Greg Holt (bottom left) and Libertarian Tim Harris (bottom left) will represent their respective parties during the general election in September.

Of 26 candidates running for the 3rd Congressional District seat left vacant by the death of Walter Jones Jr., only five remain, and Republicans will have a second primary on July 9.

For the Republican field, which began with 17 candidates, it will be a two-way race in July. District-wide, Republican State Representative Greg Murphy secured 9,505 votes, weighing in at 22.54% of the vote, while Kinston physician Dr. Joan Perry earned 6,510 votes, coming in at 15.44%. The remaining 62.02% of the vote was split among the other 15 candidates, with Phil Shepard coming in third, followed by Michael Speciale and Phil Law.

On the Democratic ticket, Allen Thomas will be the candidate on the ballot during the general election on September 10, after emerging from a field of six candidates. All told, Thomas received 12,883 votes, 50% of all votes on the Democratic ballot.

Libertarian candidate Tim Harris, meanwhile, secured 75 votes, which amounts to 56.39% of the total vote on the Libertarian ticket. Harris and lone Constitution Party Candidate Greg Holt will appear as their parties’ respective nominees on the ballot during the general election in September.

In Beaufort County, a total of 6,162 people cast their vote during the primary election, placing the countywide turnout rate at 19.6%.

1,927 votes were cast during one-stop early voting period, for a total of 6.4% of registered voters. Election Day turnout was slightly higher with 4,235 people or 13.2% of Beaufort County voters casting their ballots at their respective polling places.

The North Carolina Highway Patrol located and seized a car on Tuesday that troopers suspect played a direct role in... read more