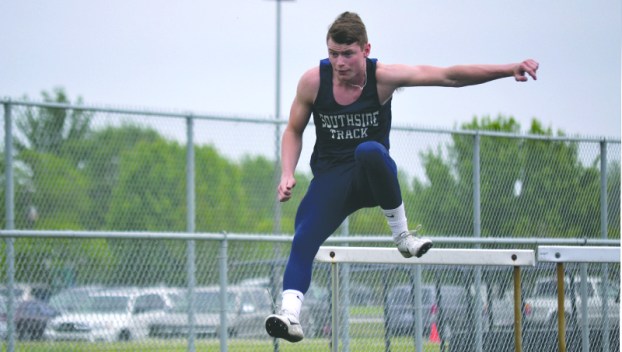 BOUNCE: Southside Seahawks Senior Richard Shavender leaps over the first hurdle of his 110-meter hurdle race that he won by a wide margin on Monday afternoon at Southside. Shavender hasn’t reached his automatic qualifying time for the event, but is faithful he will proceed to regionals. (Mitchell Thomas / Daily News)

CHOCOWINITY — The Southside Seahawks are looking to advance further than the conference meets, as they host Riverside on Monday in an attempt to get more athletes qualified for regional and state meets.

Due to the substantial amount of rain-outs and cancellations local schools have encountered, Southside’s goal in this make-up event was to get it’s athletes the qualifying times they needed to compete in post-season meets beyond the conference.

“With the storms and all we’ve had two or three track meets that rained us out, so we tried to use today as an extra track meet to get more kids qualified and give them that chance to go to regionals.” Head boys track coach Davelle Whitney said.

Southside’s 1600-meter participant Eduardo Gonzalez won the event by a long shot Monday, punching in a time of 5:24.0, but he says he’s still short of the time to qualify automatically for regionals, but is confident he will get the nod.

“To qualify (for regionals) you have to get a 4:50.0, that’s really fast, but they pick the closest times to 4:50.0, so I’m pretty sure I’ll qualify,” Gonzalez said. “I need (to improve) my last lap. Whenever we’re going up against other schools, I’m always in first that first three laps, but it’s that last lap that kills me.” 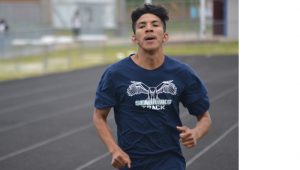 LEADING THE PACK: Southside’s 1600-meter participant Eduardo Gonzalaz strides in for a first place victory in his event Monday vs. Riverside. Gonzalez is still looking to achieve his goal time for regionals. (Mitchell Thomas / Daily News)

Most of the time, the automatic qualifying number is not reached by enough athletes to field a roster for the conference meets, so, they give bids to the athletes with the closest qualifying times, heights, or distances.

“Nobody might qualify as far as the State meet goes, but (for regionals) they’ll choose the top 16 best times,” Whitney said.

In the 110- and 300-meter hurdles, Southside’s Richard Shavender has had a very successful season, but still looks to reach his qualifying time goal for regionals.

“I haven’t lost a hurdle event all year, so I’m trying to keep it that way for conference,” The senior Shavender said. “I’m still a few seconds off for the 110- but for the 300- I definitely have the qualifying time.”

Southside’s girls easily defeated the Knights in team points, as the Seahawks combined for 94 points to Riverside’s 30.

Sophomore Zania Keys, a contributor to Southside girl’s team points win, is also looking to improve her hurdle times before Thursday. “I just have to speed up my pace, and get to (the hurdles) quicker. I wasn’t quite at the qualifying time just then.”

Since the conference track meet is Thursday, student athletes will have one more chance to qualify themselves for regionals and beyond. The event will begin around 3 p.m. At Southside High School.