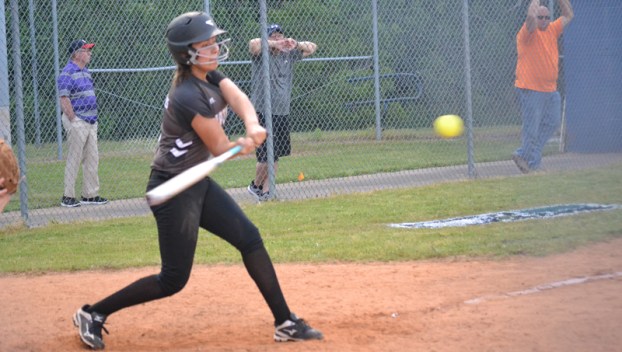 ROPED: Northside freshman catcher Citlaly Lopez came into the game late on Tuesday night and produced a 2-for-2 night with two singles in the 23-7 win over Southside. (Mitchell Thomas / Daily News)

Northside stays undefeated in the conference

CHOCOWINITY — A five-RBI night for Northside’s Kathleen Slade and a 10-run first inning helped boost the Panthers to a 23-7 victory over Southside on Tuesday evening.

Southside (7-10, 2-9 Coastal Plains 1A Conference) would struggle with commanding the strike zone early on, but as the game progressed the Panthers just managed to hit the ball where Seahawks were not.

“As long as we keep up our confidence and making plays we’ll be alright,” Kathleen Slade said. “We need our ability to keep the energy up. We sometimes settle with the runs that we have, but in the playoffs we’re going to be playing better teams.”

The Northside offense scored in four out of five innings, three of which they scored five or more runs.

“When we get up like that its good that we’re not letting up, we’re being consistent throughout the game and not giving up halfway through, keeping that same energy the whole game,” Junior center fielder Elyse Brinn said. “We can’t take these teams that have some slower pitching for granted, we can’t think we’re going to come out here and win by not doing what we’re supposed to do.”

Brinn finished the evening 3-for-5 with a double, two RBI’s and three runs scored.

It was a clean sweep in the month of April for the Panthers, as they are now on an eight-game winning streak that dates back to March 28th.

“The best thing is that we played as a team, got the young girls a chance to play and they all performed well,” Panthers head coach Eric Slade said. “Picking good pitches to hit is something we need to work on. If we wait for strikes, we’re gonna be fine.”

Northside will wrap-up their regular season tomorrow as they host Jones Senior (8-13, 4-7 CP 1A). First pitch is set for 6 p.m.