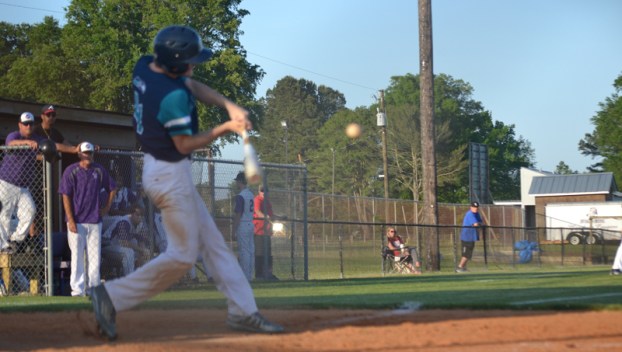 SENIOR STEPS-UP: Southside senior Christian Brinkley answered the bell for the Seahawks when they needed it most, as he connects on a base hit that scored two runs in his 2-for-4 performance Wednesday night, in his team’s 17-8 win over South Creek. (Mitchell Thomas / Daily News)

ROBERSONVILLE — The Southside baseball team has put together 29 runs in its last two contests, as they defeat South Creek Wednesday night, 17-8.

The regular season has come to a close, but the Seahawks (10-11, 6-6) year isn’t done. After defeating the Cougars (1-15, 0-12), Southside locks up a playoff spot, finishing fourth in the Coastal Plains 1-A Conference standings.

Despite some costly errors, the Southside seniors stepped up. The Seahawks jumped out to a 7-1 lead, but the pesky Cougars were amped up for their team’s senior night. They fought back and cut the lead to 8-6 by the end of the third inning.

Christian Brinkley stepped to the plate with two runners on base in the fourth and hit it to the gap in left-center field. The two outfielders collided and the ball fell harmlessly to the ground. Brinkley picked up two RBI’s on the hit to give the Seahawks breathing room again. He would finish 2-for-4 on the evening with three RBI’s and two runs scored.

“It’s a big deal,” The senior Brinkley said about their 17-run outburst. “We just need to be confident at the bat more than anything. Make good throws and decisions (going into the playoffs).”

Many of the Seahawks carried over the hot-hitting from Tuesday’s game, as Will Warren stayed perfect this week, following up his 4-for-4 outing on Tuesday against Northside, with a 3-for-3 performance with 4 runs and an RBI on Wednesday. Campbell Barnes was also perfect on the day, going 3-for-3 with a double, triple, four runs scored and three RBI’s.

Southside’s Davis Porter got the start and the win for the Seahawks, pitching five complete innings and striking out five batters in the contest.
“I just had to trust everybody behind me in the field and put the ball over the plate.” Porter said. “Southside has never really won a playoff game. So, this is really important and we want to try and be the first; we want to make history.”

Despite the offensive explosion, Seahawks head coach Kevin McRoy said there are some things to clean up before the playoffs.

“We’re hitting the ball well. Today, we gave them way too many extra outs early on that were uncalled for and made some base running mistakes,” McRoy said. “We can’t afford to do that against anyone. They were flat from the beginning (defensively), but we hung on.”

Seahawk sophomore Logan Langley came into the game in the sixth to shut the door on the Cougars. He displayed a looping curveball that kept South Creek off-balance, striking out four of the six batters he faced without allowing a hit, run, or walking any batters in his two innings of work.