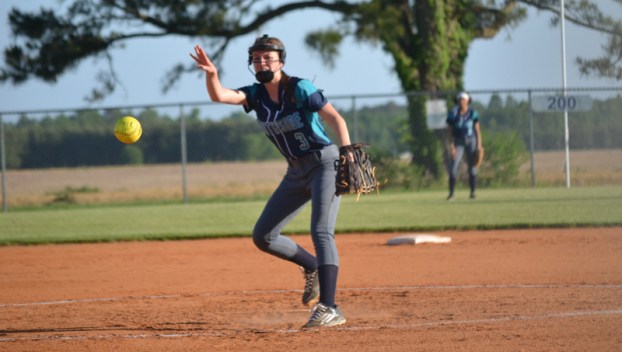 TWO-WAY PLAYER: Southside’s Alexis Whitehurst put in work on both sides Wednesday night, as she pitched a complete game with five strikeouts, and turning in a 2-for-5 performance at the plate. (Mitchell Thomas / Daily News)

ROBERSONVILLE — Run support for freshman pitcher Alexis Whitehurst elevated the Southside softball team to a 9-4 victory over South Creek on the road Wednesday night in the last regular season game of the year.

The Seahawks (8-10, 3-9 Coastal Plains 1-A Conference) could still be in-play for a playoff position, and will find out on Monday if their season will continue.

Southside picked up a run in the first inning and sent Whitehurst to the mound with a lead. Whitehurst pitched a complete game, only giving up four runs, two earned, striking out five Cougars in her seven innings of work.

“My screwball worked really well for me, and my fastball on the inside corner,” Whitehurst said. She was also excited about the fact the team didn’t have any seniors, so the same team will take the field next year. “It’s exciting because we will get to work together and build our team.”

The offense showed up for the Seahawks as three of them had two hit performances, — Madison Easly, Talia Askew, and Whitehurst.

Morgan Dixon added a two-RBI single, and Mallory Nobles also pitched in an RBI slap single in the fourth inning. The junior Nobles just recently made the move to the left-handed batters box to become a slap hitter.

“I just started slapping recently, one day (in fall ball) they made me switch and I never went back,” Nobles said about batting lefty. “We have a really good group of girls, they’ve all worked together since like, tee-ball.” 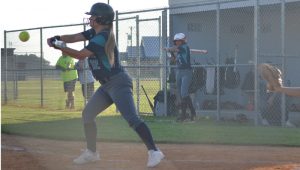 SLAPPED: Southside’s Mallory Nobles lifts a single over the infield to bring in a run in the Seahawks 9-4 victory over South Creek Wednesday night. (Mitchell Thomas / Daily News)

Southside will return all starters next year, and Nobles will continue to be a captain in her senior season.

Head coach Kam Rouse was optimistic about his team’s future, even if they don’t clinch a playoff spot this season.

“We ended the season on a good note and got a win, counting the last few innings of last night and tonight, most of the girls got their bats back hot,” Rousse said. “Everybody’s coming back next year though, and that’s what we were discussing. We have to lift weights and get stronger and faster heading into next season.”