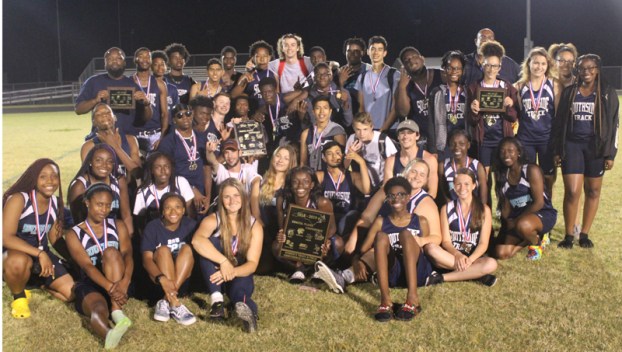 CLEAN SWEEP: The Southside track teams both brought home conference titles on Thursday evening. It is the fourth consecutive honor for the girls and the fifth straight year for the boys’ team. (Laieke Abebe)

CHOCOWINITY — Southside continues to dominate track and field in the Coastal Plains 1-A conference. The hosts of the conference championships swept both the girls and boys team titles on their own turf on Thursday. It’s the fourth consecutive title for the girls and the fifth straight for the boys. Head coaches Andrea Quinerly and Davelle Whitney have seen their team improve all season.

“It’s a great feeling to see the hard work pay off,” said Quinerly, who oversees the Seahawks track and field program. “When the kids put the work in, they’ll get rewarded for the time and effort they give for this sport. I’m proud of how we competed throughout the day. We’re going to fight down to every place on that track whether it’s for first place or fifth place.”

The Seahawks finished with 163 points to take the girls title while Northside finished second with 106. 149.5 points was more than enough for Southside to take the boys title. The Panthers finished in a tie for sixth place with 11 points.

Panthers head coach Bob Girani was supposed to be honored for the Homer Thompson:“8 Who Make A Difference” Award Thursday night at an NCHSAA event in Chapel Hill. Instead, he chose to be with his team in Chocowinity. He was honored during the meet for the award and the crowd gave him a wonderful reception.

“The award means a lot to me,” he said. “I didn’t know I was going to get that reaction from the crowd today. Only a few people knew about it, but I couldn’t go to that award ceremony. I wasn’t going to abandon my team for an important meet like this. I’m so proud to coach them and they’ve been so great for us all season.”

Southside had no shortage of individual winners. Tashonti Balance won the girls 800- and 1600-meters while also helping the Seahawks 4 X 800 team to victory. Her performance earned her a conference track MVP honor. The biggest upset of the day came in the boys discus, when conference field MVP and Seahawk Relando “Boogie” Cariago was the only participant to break 100-feet. Cariago’s nickname seemed to originate from his dancing skills, because that’s exactly what he did when he found out his 101’ 3” throw was the winner. 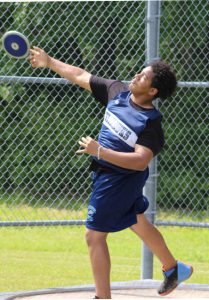 Southside’s Relando “Boogie” Cariago won the boys discus with a throw of 101′ 3″ to help his team win the team championship on Thursday.(Laieke Abebe)

“It felt pretty good”, he said. “I was surprised that I threw it that far, but it’s really awesome. I had to double check to see if that number was correct. Practice is the key for me going forward and I think I can do well if I put the work in.”

For the Panthers, Danyell Hicks was named the girl’s field MVP after winning the triple jump (32’) and getting second in the long jump. Sierra Johnson and Katie Hopkins finished first and second in the high jump, while Diamond Spencer won the 100-meter hurdles (17.66 seconds) to help her team’s strong showing. 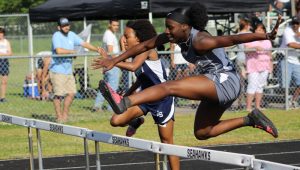 CLEARED: Diamond Spencer (right) won the 100 meter hurdles for the Panthers in 17.66 seconds. The Panthers girls would finish 2nd as a team with 106 points. (Laieke Abebe)

“I wanted to make my coaches proud,” Spencer said. “My teammates push each other to be better everyday. They’re like family to me and they have my back. Winning and representing my school the right way means a lot to me. It’s been really fun to compete as a freshman and do well.”

Southside and Northside now look ahead to the 1-A east regional track and field championships. They’ll be held at John A. Holmes high school in Edenton next Friday.