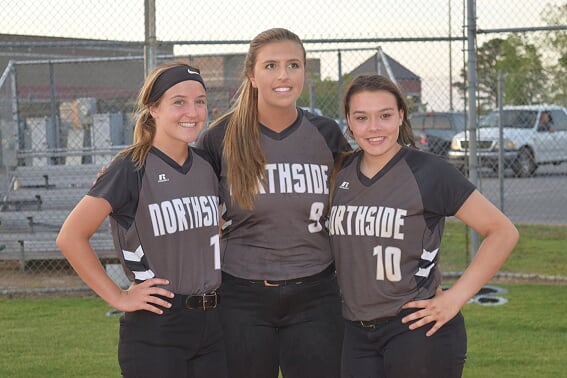 PINETOWN — All seniors reached base and tallied an RBI, while Panthers’ pitcher Madison Braddy slung a complete, perfect game in Northside’s softball victory over Jones Senior, 15-0, on the Panthers’ Senior Night.

The three Northside (16-4, 12-0 Coastal Plains 1-A Conference) seniors — Logan Jefferson, Teagan Pilgreen, and Amelia Woolard – all played a role in a big season for the Panthers.

Now on a nine game winning streak, the seniors were excited to get their journey started through the 1-A playoffs.

“It feels great,” Jefferson said. “I think the best part of our team is that we’re such a family and we’ve come together and I feel like that’s what’s going to make us go further, we’ve been playing together for years.”

Jefferson went 3-for-3 with three RBI’s, two runs, and hit her third homerun of the season, fourth of her career.

“We’d like to go all the way, but we take everything with a positive and very humble attitude,” Woolard said. “Everything happens for a reason, but we’re going to go into every game with a winning attitude.”

Woolard has now reached base safely in 10 consecutive games.

“Yes and kinda no,” Pilgreen said when asked if she was sad about this being her last season. “It’s the sport I love the most. Playing here this last year I’ll miss the most because I’ve played with these girls for the longest time, so leaving them all is going to be the saddest part.” Pilgreen extended her hitting streak to six games, going 1-for-4 on the evening.

Everything seemed to go right for the Panthers, as they used two big innings of offense, scoring seven runs in the second inning and eight in the third; while Braddy struck out nine of the 15 batters she faced without allowing a hit or a walk.

“It’s fun, we’ve got a special group,” Head coach Eric Slade said. “We need to concentrate on the fundamentals (heading into the playoffs). Keep our heads and our minds straight. Play each game and each out giving 100%, that’s what we talk about all the time. The good Lord has blessed us this far and we’ll go however far He wants us to go.”

Finishing the season as conference champions, the Panthers will host at least one playoff game. They will find out Monday from the NCHSAA who they will be playing in the first round.

By: Laieke Abebe CHOCOWINITY — Southside continues to dominate track and field in the Coastal Plains 1-A conference. The hosts... read more