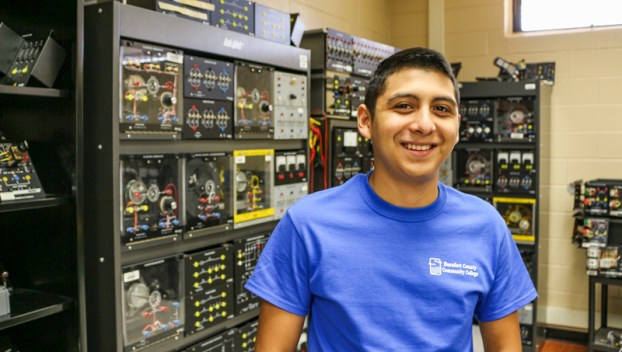 Planning a system for his life: Cruz Lugo Reyes

Electrical work is about making connections. Everything has to fit together so that a constant stream of electricity can flow in a complete circuit. The difference between basic electrical work and electrical engineering technology is being able to step back and see the system as a whole. Cruz Lugo Reyes has that ability. He sees the entire system–from an internship to career to side businesses to world travel­­–and has mapped out his life in detail. The Beaufort County Early College High School student is inquisitive, diligent and uses his 24 hours wisely as to not overload himself in his insatiable quest for knowledge.

Just like the he electricity studies, Reyes makes his way around the Beaufort County Community College campus, from his electrical engineering technology classes in Building 2, onto the library to study, and to his night classes on HVAC repair. Reyes grew up fixing things like cars, learning how systems worked together and individually.

He is in the top five of his graduating BCECHS class and his college GPA is a 3.99. He is a disciplined student, paying attention in class, and researching topics outside of it.

“I like to devote weekends to entirely myself, for working or for going out, so I get everything done by Friday,” he says. He works for a remodeling company during the weekends, installing drywall and framing.

“There are 24 hours in a day,” Reyes laments. “We could definitely get a lot done if we use every hour wisely.”

This summer, Reyes has an internship lined up with Domtar in Plymouth, a company he hopes to work with in the future. He will maintain electrical equipment for the company’s wood pulp operations, including generators, boiler systems, conveyer belts and components of its wastewater treatment plant. The plant processes logs using high pressure water systems, mechanical systems, and chemicals, and the logs and pulp take a toll on these components.

When it comes to his personal finances, Reyes is shockingly responsible for an 18-year-old. “Whenever I have the money, I invest in education,” he says. He paid for his HVAC class and a forklift operation class on his own.

“Sometimes I feel very limited in my time, but I want to learn even more, so I feel restricted in that part. I like to learn as much as I can. I took courses in French for the fun of it. I took a forklift class for the fun of it. There’s some classes I can’t take because my schedule interferes with it.” He could not take American Sign Language and Conversational French for this reason.

He repeats his mantra about time management: “If we use our time wisely, we can maximize the benefits.”

One day, Reyes hopes to complete a more global circuit. His eyes light up when he speaks about traveling. On his list: Mexico, Latin America, Europe, Japan and Africa. He has already traveled around the United States, visiting states like New York, Arizona and Florida. He loves researching different governments and even twists together his diverse interests, looking at how countries like Mexico adopted advanced HVAC technologies before the United States.

He sees himself rising into management as quickly as possible, but Reyes also plans to get a contractor license and employ as many people as possible. He sees people who are held back by obstacles, and he wants to see them flourish. He also plans to become a licensed electrician.

When he graduates in May from both BCECHS and BCCC, Reyes will continue to follow his blueprint carefully and without any anxiety, seeing that whole system is working as planned, and that there is enough time to get it all done, if we use every hour wisely.

BELHAVEN — Seven friends who are patrons of the arts came together in Belhaven to launch “belle arts gallery.” The gallery held... read more