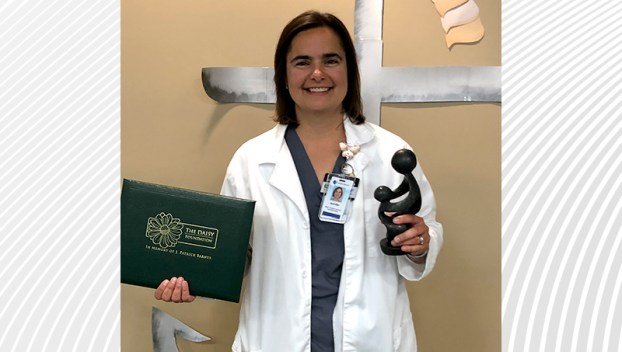 Vidant Beaufort Hospital is proud to announce that Surgical Services Nurse Manager Jennifer Mitchell has been named a recipient of the DAISY Nurse Leader Award. The DAISY Award recognizes extraordinary nurses who demonstrate the attributes of an exceptional professional such as compassion, teamwork, persistent patient advocacy, community awareness, timely, informative and therapeutic communication and consistent adherence to the highest clinical and ethical standards of the nursing profession.

Mitchell graduated from the East Carolina University with a bachelor’s of science degree in Nursing in 2000 and joined Vidant Beaufort Hospital in 2004. She was named manager of surgical services in January 2015. Mitchell was nominated by fellow nurses and colleagues, Samantha Beecham, LeAnn Dixon and Sonya Jones.

Mitchell was presented the award by Patti Hudson, vice president of patient care services at Vidant Beaufort Hospital, as she was surrounded by her family, hospital leadership and her peers. Mitchell was graciously humble upon receiving the award.

Vidant Health recognizes DAISY Award winners each quarter. Each nurse that is chosen for the award is recognized in a public ceremony and receives a hand-carved serpentine stone sculpture known as A Healer’s Touch, cinnamon rolls and a DAISY pin. They also sign a recognition banner that is publicly displayed in their unit for the quarter.

The DAISY Foundation was established in 1999 by some members of the family of Patrick Barnes. He died at the age of 33 of complications of ITP. The Barnes family wanted to find a way to turn their grief into something positive and honor Patrick. As a result, they came up with DAISY — an acronym for Diseases Attacking the Immune System — and The DAISY Award for Extraordinary NursesThe DAISY Award recognizes, honors and celebrates nurses throughout the year. What started out as a thank you from the Barnes family to nurses has grown into a meaningful recognition program embraced by healthcare organizations around the world. Learn more at www.daisyfoundation.org.

Planning a system for his life: Cruz Lugo Reyes

Electrical work is about making connections. Everything has to fit together so that a constant stream of electricity can flow... read more