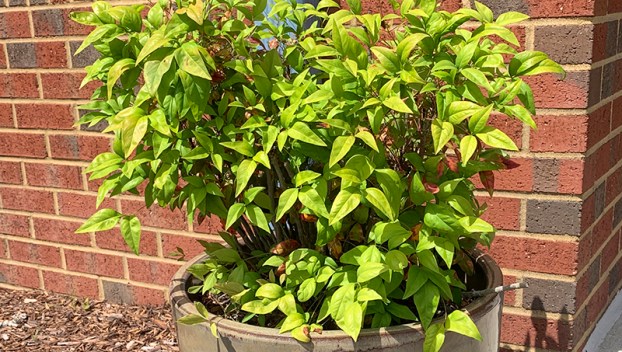 Why don’t I have any berries?

I received this question from a resident of Hyde County this week — thank you for calling! As the area consumer horticulture agent, I cover Beaufort, Hyde, Tyrrell and Washington counties. Please do not hesitate to give me a call if you reside in one of these four counties. The plant in question here is Nandina spp., I am not certain what cultivar. The problem is, there have never been any berries on the plant.

What is nandina? This is a landscape plant, found on the invasive species list in the southeastern United States. It is a pretty tough shrub that is known for its fire-red foliage in the fall and the beautiful deep red berries that persist from fall, throughout the winter. The berries are often used in floral arrangements and decorating around Christmas time. It is a low-management shrub requiring very little fertilizer, if any, and very little pruning. It prefers moist, well-drained fertile soils and partial shade to full sun. It can get out of hand however, spreading by rhizomes to overtake your ornamental beds. The berries can be dispersed, in some cases, causing unwanted spread of the plant as well. Once established, nandina is drought tolerant. This plant is also considered to be deer resistant. A quick lesson on resistance to deer and wildlife in general: resistance does not equal no damage! If wildlife, especially deer, are hungry, they will eat anything!

The deer resistance comes from the plant’s toxicity. The leaves and berries are toxic to both humans and wildlife. Many of us gardeners and wildlife lovers may have, in fact, planted these bushes for the specific purpose of feeding birds throughout the winter. This is not a good plant to use for that purpose! The berries produce cyanide, which can poison, if not kill, birds when consumed in large quantities. Confession: even knowing nandina was toxic to wildlife, I suggested a possible cause of no fruit was bird depredation! It is a possible cause, but not one that would happen every year.

There are other causes of no fruit on nandina and other fruiting bushes. One such cause is cultivar selection. Many of the recommended cultivars of nandina do not fruit at all. These are recommended because there is no chance of escape into the wild or that any wildlife would be poisoned by them. Pollination is a possible cause but not in the case of nandina, because they are self-fruitful. This means that they do not require pollination from another bush or cultivar to pollinate.

Timing of pruning activities could cause no berries. Do not prune these bushes just prior to, during or immediately after flowering if you are wanting berry production. Prune only after fruiting has finished. The best method to prune nandina is similar to that of blueberries. Prune out entire canes just above the soil surface, making sure to take out the oldest wood first. If a large specimen has not been pruned for some time, focus on cutting out a third of the oldest canes each year for the next three years. Due to the toxic nature of this plant, it is a good idea to exercise caution when using in floral arrangements near small children. There have been no reported cases of human poisoning from nandina, however, using caution around small children is recommended! It is best to keep nandina isolated, perhaps even grown in a large container. Make sure to stick to the varieties that do not fruit.

The Extension Master Gardener volunteers in Beaufort County are having their annual Pass-Along Plant sale May 4 from 9 a.m. to noon. If you are looking for a specific plant, you may find it there for way less than retail! They have other knick-knacks, lawn art and landscaping materials as well. This sale is their main fundraiser and supports their education and programing efforts throughout the entire year. Check it out!

Have horticulture a question? Call the Extension Master Gardener volunteers in Beaufort County or Gene Fox, at 252-946-0111 or email Gene at gene_fox@ncsu.edu. Your question might just make the paper!

Partner in command — no yelling!

For everyone’s safety, invest in teaching a spouse, partner or significant other a few basic boating skills, primarily, how to... read more