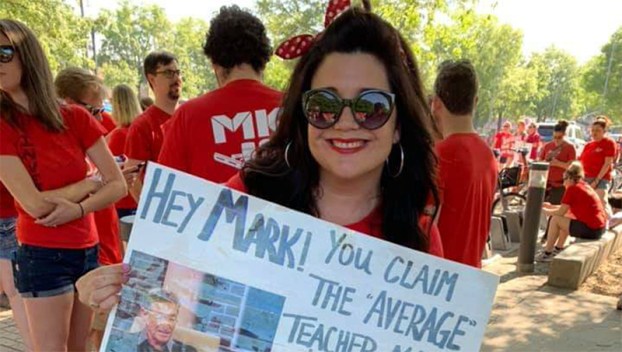 Thirty-four school districts in 31 counties closed Wednesday as educators across the state headed to Raleigh for the March for Students and the Rally for Respect.

Thousands of teachers marched through downtown Raleigh, an effort to grab legislators’ attention and a push to get more funding for education. Several of those teachers wearing “Red for Ed” were from Beaufort County.

“My purpose for going was to just try to have a visible, sort of in-your-face moment for the General Assembly, because they do not treat teachers terribly well,” said Gene Smith, a Southside High School history teacher. “Certainly, whenever you have thousands of people in the same color shirts marching through downtown Raleigh, it gets people’s attention.”

A 29-year teaching veteran, Smith said the current situation is far removed from the progressively educational state of two decades ago.

“People say this is the way things have always been — teachers should have known what they’re getting into — but it hasn’t always been this way. It’s changed in the last 12 years,” Smith said, adding that many teachers struggle to find supplies and have to teach using outdated materials. “If I could get maps that have Russia on them instead of the Soviet Union — that would be nice.”

Funding is the issue. Though the proposed $24-billion state budget for 2019-2020 does reinstate a 10% salary boost for teachers who hold master’s degrees, along with an average 4.6% pay raise, it does not address the points teachers were making on Wednesday.

The North Carolina Association of Educators maintains that expansion of Medicaid will improve the health of the most vulnerable students and their families — improved health means less sick days, better nutrition and better cognition.

Though seemingly unrelated, an underfunding of education and lack of health care options are tied together, according to Anna Ramey, an art teacher at Southside High School.

“There’s so much involved with teaching, that you really can’t say it’s just one thing — it all comes together as a whole,” Ramey said. “When you’re losing assistants at elementary schools, combine that with overcrowding and growing class sizes, and the teachers aren’t getting one-on-one time with their students, those students are more likely to fall behind. A lack of updated resources means students fall behind in the upper grades.”

Smith and Ramey attended the rally in Raleigh for a second year in a row, adding their voices to the thousands from across the state. Both said they’re disappointed by a number of legislators’ dismissal of the rally, as well as misinformation about the reasons behind it.

“We all came together because we have one common goal, and that is to help our students as much as we can,” Ramey said. “A good deal of the public thinks we’re just money hungry, but that’s not it at all. None of got us into teaching for the money. We got into it because we care about children and making a better world for them and helping them make a better world for themselves.”

Smith said he questions whether the $54,000 average state teacher pay figure that some legislators cite is accurate.

“That’s what we’ve been reading in the paper. Well, I read my paystub, and it doesn’t say anywhere near that,” Smith laughed.

Bigger than the pay issue, however, is the lack of respect given to teachers, and lack of parental and community support, Ramey said.

“Anytime teachers advocate for more money from the state, they’re demonized,” Ramey said. “I still have a hard time wrapping my head around how it feels like we are so hated right now.”

She said the sense of camaraderie at the rally was inspiring. Whether the Raleigh rally numbers will make an impact remains to be seen, however.

“I feel like we are heard, but I’m not sure that enough people are paying attention. I hope they do and I hope they will, but I feel like sometimes it falls on deaf ears,” Ramey said.