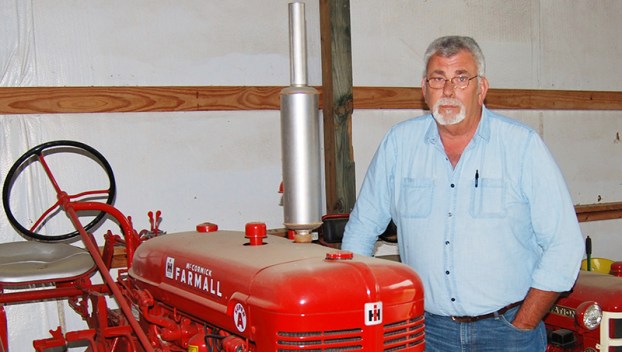 FARM HISTORY: John A. Moore of Washington is proud of his 1951 McCormick Farmall Super A tractor, which will be displayed during this weekend's Eastern Antique Power Association show. (Kevin Scott Cutler)

John A. Moore admits that, after his family, one of his most prized possessions is a tractor manufactured years before he was born.

And as president of the Eastern Antique Power Association, he’ll be sharing that treasure with the public during this weekend’s show hosted by the club.

“It means a lot to me since it’s a family heirloom, so to speak,” Moore said of the bright red 1951 McCormick Farmall Super A tractor. “I remember my dad using it to farm when I was a kid. Daddy gave it to me.”

The tractor was in well-worn condition when it passed into Moore’s hands.

“It wasn’t restored, but I had it running, and I could drive it,” he recalled.

Moore set about restoring the tractor during the late 1990s. Much of the work was done by Lynn Whitley and Aaron Douglas, both of who worked for MacKenzie Equipment Company, where Moore’s father originally purchased the tractor. The company was located at the corner of Second Street and Hackney Avenue in Washington.

“I had them rebuild the engine, and Tom Cutler of Terra Ceia did the painting,” Moore noted. “Stan Hudson, James Baker and myself rebuilt the back end of it, the transmission and bull gears.”

Moore estimated the original sale price for the tractor was in the neighborhood of $1,200. It’s gone up in value.

With restoration costs figured into the equation, it’s more like a labor of love than an investment.

“You can’t ever get the money out of it that you put into it,” Moore pointed out.

Are Moore’s five children fighting over the honor of being the next generation to own the tractor?

“Not yet,” he said with a smile. “There’s enough tractors here to go around for all of them.”

The tractor will be among the items showcased during the Eastern Antique Power Association’s annual show, planned for Saturday.

“We should have everything ready by 10 a.m., and we’ll be out there most of the day, depending on the weather,” Moore said.

Displays will include tractors, antique engines and garden tractors.

“We’ll have pretty much any farm-related antiques,” Moore said. “We’ve even had people bring outboard motors and chain saws.”

The show will be held in the vacant lot adjacent to Washington Plaza, located just off 15th Street in Washington, through the generosity of the Robin Moore family, according to Moore. Local Boy Scouts will sell food and homemade ice cream will be available for purchase as well.

Tabatha Hall found her calling in first grade: she wanted to be a nurse. A little more than a year... read more