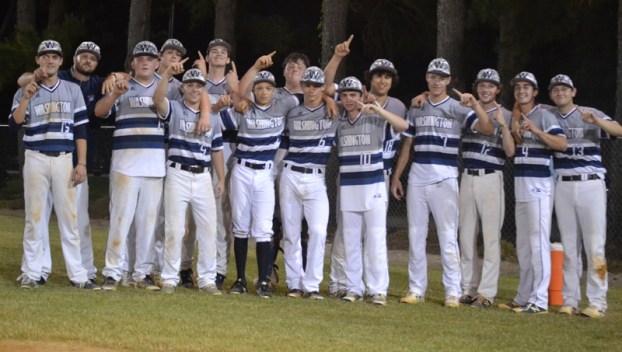 TEAM WIN: The Washington Pam Pack baseball team needed everybody’s help to clinch the conference title on the road Friday night, with a 4-2 win over West Craven. This is the first conference title for the Pam Pack since 1998. (Mitchell Thomas / Daily News)

VANCEBORO — Washington defeated the West Craven Eagles, 4-2, with the help of Logan Everette’s pitching performance and Jeremiah Moore’s 3-RBI’s Friday night in Vanceboro. This is the first conference championship the Pam Pack have won since 1998.

Washington (16-5) wasted no time getting things started, as Mason Weaver and Everette singled, before Jeremiah Moore’s single would score them both to take a 2-0 lead.

“The top of the first kind of depicts how the rest of the game is going to go, so I was glad I was able to start it off,” Weaver said.

Everette was happy with the run support he got early on, as he was able to settle in and pitch his game without ever trailing.

“Just had to pound the zone, figure out their weak spots, throw them the deuce pieces, and put them down,” Everette said. “I’ll be ready to go (on Friday).” The Pam Pack will play on Friday if they win in the first round on Tuesday, when Hunter Hall will take the hill. 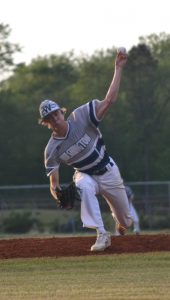 HIGH POINT: Washington’s senior pitcher Logan Everette at the top of his release in the first inning of the Pam Pack’s 4-2 win over West Craven. Everette had 11 strikeouts. (Mitchell Thomas / Daily News)

Hall helped out his teammate on the mound Friday, as a West Craven single to left field almost scored a run in the bottom of fourth that would’ve tied the game, but Hall threw a great ball to Robert Pollock in front of home plate to cut down the runner.

Hall also came into pitch in the sixth inning, gave up a run but closed out the game to earn the save and give the Pam Pack the title clinching victory. Washington avoided a tie breaking game on Saturday with the win, that would’ve been played to determine seeding in the state tournament.

Pam Pack head coach Kevin Leggett was ecstatic about his team’s victory, and talked about the importance of first inning runs.

“It’s good when you can get them, when you got a good pitcher like (Everette) throwing, you get an early lead, and it puts them in a bad spot. It takes a lot of confidence to come back from that, but (Everette and Hall) shut them down time, and time again,” Leggett said. “If we can keep up this energy, we’ll be fine.”

The Pam Pack will host South Columbus (11-11) on Tuesday in the first round of the 2-A state playoffs.

CHOCOWINITY — The Washington Pam Pack are preparing for the East Carolina regional golf tournament by holding a practice round at... read more