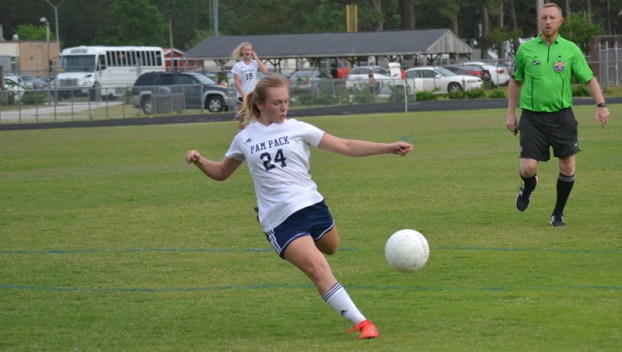 VANCEBORO — Washington’s Lilly Frances Lobos keeps making history in her sophomore season, as she now claims the record for goals scored in a girls or boys season with 57, and career goals with 105, after the Pam Pack’s 9-0 victory over West Craven on Friday night.

Lobos got right to work in the game, as anytime the ball was in the Eagles’ defensive area, Lobos seemed to find a way to the ball, and usually, she scored.

The Pam Pack’s defensive pressure seemed to overwhelm the West Craven offense and it usually set up the Washington mid-field and attackers with the opportunity to score. Lobos scored four of the Pam Pack’s five goals in the first half, and was set up brilliantly a couple of times by her teammate Rebecca Zerniak, who had three assists on the night. She also broke through for a goal in the contest.

The Pam Pack didn’t have just one outstanding performer, as Alyssa Villegas tacked on three goals in the game, adding an assist as well. 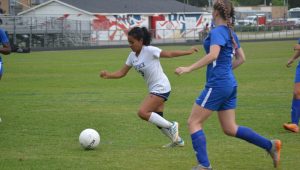 GOAL: Pam Pack’s Alyssa Villegas scores a goal in the first half of the 9-0 route over West Craven on Friday. Villegas had three goals and an assist in the contest. (Mitchell Thomas / Daily News)

It was much of the same in the second half for the Pam Pack, as four more goals were scored, including the record-breaking Lobos goal.

“It feels pretty good, I’m pretty in shock about it,“ Lobos said. “We came out so much better than we all expected, everyone thought we were going to be the underdogs after losing 12 seniors. We just have to work on communication and our defensive skills, but other than that I think we’re doing pretty well.”

Another happy camper on the pitch Friday evening was head coach Ed Rodriguez, as his team cruised through conference play to win the title and now he looks ahead to the playoffs.

“The goals we scored were great, a lot of them came from one touch,” Rodriguez said. “It’s human nature to be complacent (about their great season), but I tell them ‘Hey, if we really want to work and keep an aggressive attitude, we can make a run in the playoffs.’”

The Pam Pack will host Trinity at home Tuesday at 6 p.m. in the first round of the 2-A state playoffs.

VANCEBORO — Behind the pitching of Abby Tucker and a team full of hot bats, the Washington Pam Pack have... read more