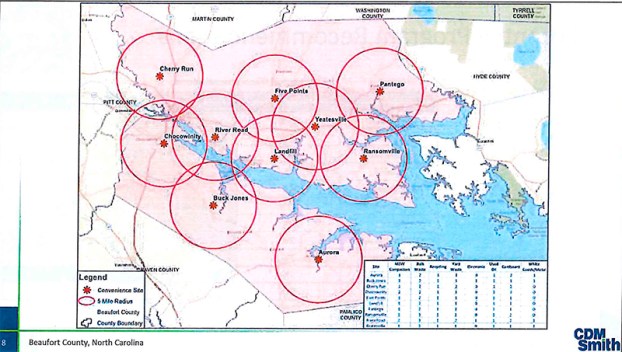 The report is in, as is the recommendation for more county convenience site closures. Whether county commissioners choose to consolidate and improve selected trash disposal sites or keep all locations operating will likely be hashed out in the coming budget workshops for the 2019-20 county budget, according to county Manager Brian Alligood.

Kenton Yang, an environmental engineer with CDM Smith, announced the findings of the county’s convenience site assessment at the Beaufort County Board of Commissioners meeting Monday night.

Based on the tonnage of waste disposed of at each of the county’s 10 sites, the condition of each site, whether each site is leased or owned by the county and sites’ proximity to one another, CDM Smith recommended improving six sites, expanding one and closing three — potentially a 14% reduction in cost for a waste disposal program that typically costs the county $1.15 million each year.

The six sites recommended for improvement are: River Road, at Magnolia School Road; Five Points, on Ambrose Road in Pinetown; Cherry Run, on Cherry Run Road; Aurora, on Old Campbell’s Creek Road; Pantego, on Beech Ridge Road; and Ransomville, at Pamlico Beach. Ransomville is already in the process of being improved due to the November closing of the Pamlico Beach site.

The sites that could be considered for closure are: Buck Jones (Weyerhauser), on Clay Bottom School Road; the Yeatesville site on U.S. Highway 264 East; and the Hawkins Beach Road landfill.

The Chocowinity site on Gray Road could be considered for expansion to make up for the loss of the Buck Jones site.

Yang said the recommendations are based on CDM Smith’s objective assessment of Beaufort County’s program, but there are other options.

“There are a lot of things you can tweak underneath that,” Yang said.

Other options include keeping the Hawkins Beach and Buck Jones sites open, but reducing operating hours and days, or the county could purchase land to build sites in more central locations and avoid lease fees, an example of which would be a more centrally located Buck Jones-Aurora site, or Pantego-Five Points site. The county leases each of those sites.

Yang also suggested the county consider reinstating a sticker program for garbage bags, so out-of-county users without stickers won’t be able to dump their garbage in Beaufort County. Such a program’s savings would reduce the fees charged by Republic, which disposes of county waste on a price per ton basis. Currently, there is no deterrent to prevent people from carting waste from outside of the county and dumping it in Beaufort County convenience sites.

Other issues include the many improvements needed at the county sites: damaged or missing rails and vehicle fencing at drop-off sites, as well as site lighting.

Yang said another consideration is that the North Carolina Department of Environmental Quality, Division of Waste Management, appears to be moving forward with requirement for all convenience sites, which could include permitting fees — whether to the county for all sites or per county site, remains to be seen.

“It’s a lot for commissioners to chew on as we go into budget sessions,” Commissioner Stan Deatherage said.

Deatherage said he didn’t want the Beaufort County landscape to suffer as a result of closures.

“I know what will happen in Beaufort County if we started closing sites. People will start dropping trash on the side of the road,” Deatherage said.

At $1.15 million a year, some reduction needs to be made, but it may not be as drastic as site closures, according to Alligood.

“Well, come budget time, I think the biggest piece (commissioners) are going to look at is the sticker program,” Alligood said.

Beaufort County commissioners have a new place to hash out local issues. The Board of Commissioners met Monday night for... read more