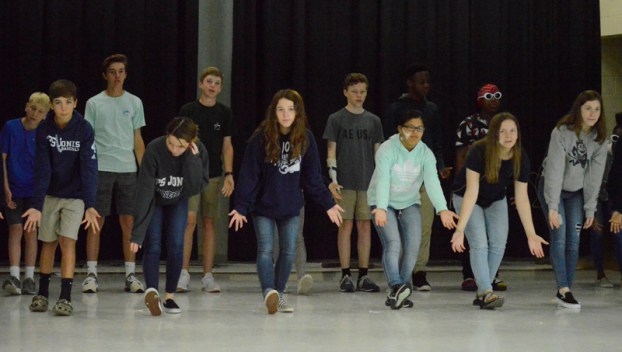 NEVER HAD A FRIEND LIKE ME: P.S. Jones eighth graders practice one of the many “Aladdin” musical numbers they will perform for the public on Thursday, Friday and Saturday. (Matt Debnam/Daily News)

It’s a tale that’s been told throughout the ages, and this weekend, P.S. Jones eighth graders will offer their take on the classic story of Aladdin and his magic lamp. A total of 33 students will take to the stage to perform the musical.

One of the 1,001 stories that make up “Arabian Nights,” the tale of Aladdin and his magic lamp was popularized in the early 1990s by an animated Disney film starring Robin Williams as the wisecracking genie. Later this month, a live-action movie starring Will Smith will bring the classic story back to the big screen.

“I figured that would give a lot of people incentive to come see the show in preparation for the movie,” said P.S. Jones music teacher and play director Emily Manning.

For the kids involved, the performance is the culmination of nine weeks of preparation and practice.

“We went through the whole play without the stuff, then we practiced our singing and two months ago, we went to the stage and started practicing our choreography,” said Dawson Mitchell, who will be playing the role of Aladdin.

In what has become an annual tradition for the P.S. Jones eighth-grade class, the musical brings together both experienced young actors and actresses, as well as students who have never performed on stage.

“It’s been a lot of work,” Manning said. “A lot of these kids are really motivated to do this. … It’s really an interesting experience to watch how the people who have done this before are helping and guiding the students that are new at this kind of thing.”

For Manning, who has known many of the students for the past three years, the experience of seeing them come into their own onstage has been rewarding, especially seeing them make music.

“Being able to perform music is very different from just listening to music or even dancing to music,” Manning reflected. “You’re kind of creating it yourself. These kids are finding talents that they didn’t know that they had, and I’m watching these talents increase each day up until the performance.”

As for the students, preparing for the performance has been a confidence booster as they find themselves onstage.

“When you get on the stage, it just turns on, and it’s so exciting being up there,” said Genie actress Sidney Selby. “You really get to become your own character and exert yourself.”

“Aladdin” comes to the P.S. Jones auditorium for three performances this week. The public is invited to enjoy the musical Thursday and Friday at 6:30 p.m., or at the matinee performance Saturday at 2 p.m. Tickets are $8 cash at the door.

The report is in, as is the recommendation for more county convenience site closures. Whether county commissioners choose to consolidate... read more