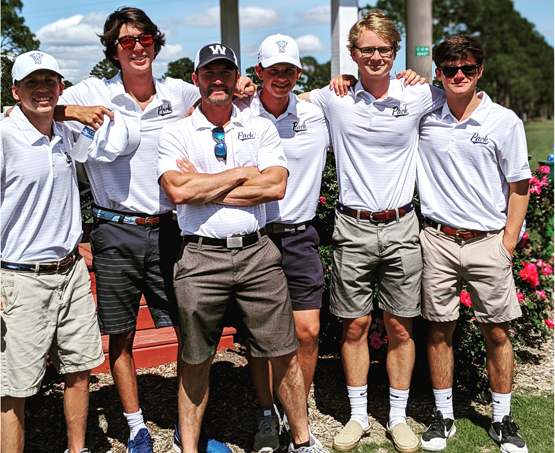 TEAM EFFORT: The Washington golf team advances to the state championship golf tournament after scoring in the top three teams in the regional tournament at Wedgewood golf course in Wilson on Monday.(Jim Kozuch)

WILSON — The Washington Pam Pack golf team played well enough in the regional golf tournament held at Wedgewood golf course on Monday to advance to the state tournament at Longleaf Golf & Family Club in Southern Pines on May 13-14.

“I’m very excited for the guys this year to make state. The seniors on this team have worked really hard,” Kozuch said. “We are all excited and hope to play well at the state championship.”

The team of five Pam Pack golfers tallied a 364 in the event, which is the total number of strokes between themselves. The best score came from John Hinsley who finished with an 82 (10 over par). The score gave Washington a third place finish in the field of seven teams. 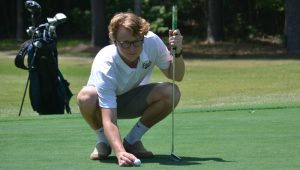 SIZED UP: Pam Pack golfer John Hinsley sizes up his put in a practice round before the regional tournament that advanced them to state on Monday. (Mitchell Thomas / Daily News)

Pam Pack golfer Jackson Cournoyer was happy to see his team advance to State, but wasn’t happy about his own score.

“My putting was not on, just was not putting the ball very good, I’ve never had a good round at Wedgewood,” Cournoyer said. But he was adamant that he would have a better day at Longleaf next week in the State tournament. “Oh yeah, I’ll be ready. That’s why I’m out here practicing,” Cournoyer said today as he just got done with a practice round at Cypress Landing this afternoon.

Washington just edged out the third place spot, as they beat out Croatan and Roanoke Rapids by three strokes to advance to the State tournament. Pam Pack golfers Jackson Paul, Graham Parker, Jackson Paul, Cournoyer, and Hinsley will be the participants again next week to try and bring home a trophy.