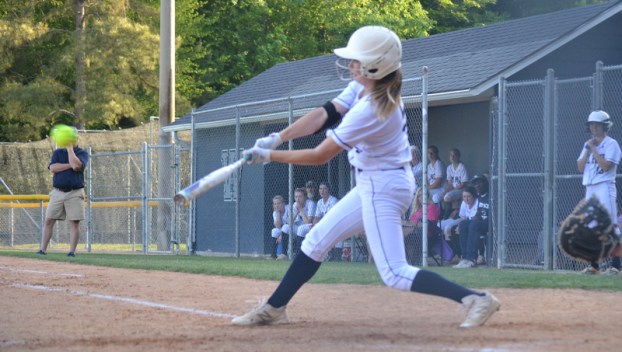 LACED: Washington’s Abbi Tucker got it done offensively and defensively in Tuesday’s playoff win over West Bladen. She went 2-for-4 with two singles and a couple of RBI’s to go along with her complete game on the mound with seven strikeouts. (Mitchell Thomas / Daily News)

WASHINGTON — It was much of the same for the Pam Pack softball team on Tuesday evening as they used an Emme Davis home run and Abbi Tucker’s pitching to a 15-1 win over West Bladen.

Runs came early and often for Washington (20-0) as they scored seven runs in the first inning. West Bladen’s (11-10) pitchers threw strikes most of the evening, and the Pam Pack took advantage. With 17 total hits in the game, 12 of Washington’s 15 runs came from RBI’s.

“The impressive thing was we matched their score in the first inning, and then all of a sudden we scored six with two outs,” head coach Doug Whitehead said.

The Pam Pack would go on to score at least one run in each frame, and every batter they sent to the plate reached base.

“I was so excited to get to the plate because I knew I was going to hit the ball tonight,” Pam Pack senior Lily Wright said. “Me and these girls we’ve been playing together our whole lives and we’re just best friends. It’s the best feeling.”

Wright was perfect on the afternoon going 2-for-2 with two singles, two RBI’s, and two runs scored.

Davis went 2-for-4 with her sixth homerun of the season, a double, and four runs scored in the contest. She has now improved her season batting average to a scorching hot .431.

Summer Campbell and Sydney Keech both had three hit nights, while Keech knocked in three RBI’s. The lone starting freshman Lacie Campbell also got in on the action, going 2-for-4 with a couple of RBI’s as well.

The offense was impressive, but Tucker always has it going on the mound. She threw another complete game, winning her 17th game on the season out of her 19 starts. She collected seven strikeouts, allowing only three hits and walking one with an unearned run.

“We’ve got Bunn,” Whitehead said. “Bunn is better than a 16-seed. I thought we’d meet them later in the playoffs. They’re a good quality program, so we’re going to have our hands full.”

WASHINGTON — In what was an incredible season for the young Pam Pack soccer team, they couldn’t find the back of... read more