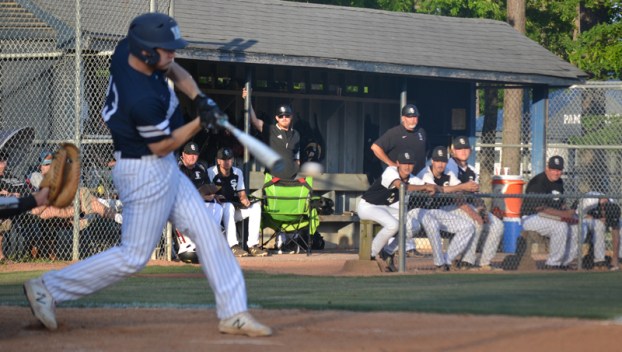 INTERFERED: Pam Pack’s senior Jeremiah Moore reached safely on a hit to the shortstop, but he made contact with the South Columbus catcher’s glove to give him the free pass to first base. Washington went on to win, 5-2, in the first round of the 2-A state playoffs on Tuesday. (Mitchell Thomas / Daily News)

Pam Pack baseball advances to next round

WASHINGTON — It wasn’t always pretty. The Pam Pack even had to battle back from deficits a couple times in the ball game, but managed to scratch, claw, and get a couple of bounces to go their way to advance past South Columbus, 5-2, Tuesday evening at Washington.

Both teams seemed to experience a little bit of first round jitters, but that all went away when runs started to score. Columbus struck first, but anytime they scored in the game, the Pam Pack (17-5) answered in the bottom of the frame.

Hunter Hall found himself in some trouble on the mound a couple of times. After a run scored early in the game, he pitched his way out of a runner’s on first and second, no-out jam. In the bottom of the second inning, Hayden Anderson stepped up to the plate with Jeremiah Moore on third. He hit a fly ball to left field that was just deep enough to score Moore and tie the game at 1-1.

The Stallions scored again in the top of the fourth, but Washington wouldn’t panic. Moore led off the bottom of the fourth and reached on catcher’s interference. A ground out and a couple of wild pitches moved Moore over to third. A passed ball slipped behind the catcher again and despite a little hesitation, Moore still scored standing up.

“It’s good,” Moore said about scoring big runs in big games. “It gets us motivated and gets the team fired up and I like doing it, so we’re going to keep it that way.”

In the fifth, the Pam Pack took its first lead. Mason Weaver singled, Hall’s groundout moved him over, and Moore’s single scored him to take a 3-2 lead.

Hunter Hall threw a complete game on Tuesday, battling through plenty of adversity in the ball game, but managed to come out on top and remain unscathed on the bump this season with a 9-0 record.

“I just had to re-think, act like it’s a regular season game and take it that way,” Hall said. “I did that after about the third inning and it worked out pretty good for me.”

In the sixth, Logan Everette gave his teammate some cushion to work with going into the seventh. With two outs, Anderson was hit by a pitch, Wilson Peed and Weaver walked, and Logan Everette hit a shot to second base that hopped right over the crouched infielder to score two runs and take a 5-2 lead.

Hall would close out the game, and head coach Kevin Leggett was ready to move on to the next round.

“Offense wasn’t quite there all night, but you know, we’ll take the win. We got to win this one to get to the other ones,” Leggett said. “They threw a new guy every two innings. It’s hard to get a rhythm when they put new pitchers like that in, but we clawed, we fought, and got the runs when we could.”

The Pam Pack will face a familiar foe in Friday’s second round match-up, as they will host Ayden-Grifton again Friday night. First pitch is set for 7 p.m.

Spring athletics season has come and gone in a flash, but this particular season, the Pam Pack may try to... read more