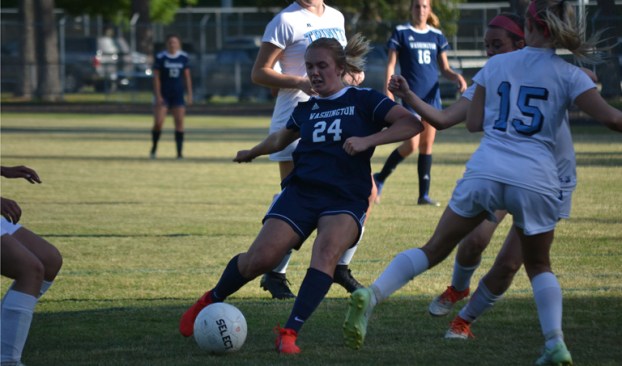 WASHINGTON — In what was an incredible season for the young Pam Pack soccer team, they couldn’t find the back of the net on Tuesday afternoon, falling to Trinity, 1-0.

The Pam Pack had their chances, especially late in the second half with a flurry of opportunities. The ball even fell to Lilly Frances Lobos’ feet a couple times but her shots were just over the crossbar. With just under 30 seconds to go, a cross into the Washington box was hit by a Trinity player’s forearm, which usually calls for a penalty kick, but the referees didn’t call it.

However, a very defensively sound Trinity team stayed in control of the game for a good portion of the contest. They moved the ball around the Pam Pack defensive area well enough to force the mid-fielders and attackers to move up, and Washington didn’t get near as many breakaway opportunities to score.

In the first 10 minutes of the second half, Trinity was the one to get the one-on-one opportunity with Washington’s goalkeeper Alexa Davenport. Bulldogs’ mid-fielder Anna Kate Patterson buried it into the bottom left corner of the net for the only score of the game.

“We had the chances. Right there at the end all you have to do is just touch it,” head coach Ed Rodriguez. “I told them that some of them need to work on soccer more than just two weeks before the season, which is what most of them usually do.”

Rodriguez also praised his goalkeeper, Davenport, on one of her best games in a Pam Pack uniform. Davenport is only a freshman.

On the bright side, this could motivate an incredibly young Pam Pack soccer team that only graduates one senior in Claire Shepard.

Pam Pack baseball advances to next round

WASHINGTON — It wasn’t always pretty. The Pam Pack even had to battle back from deficits a couple times in... read more