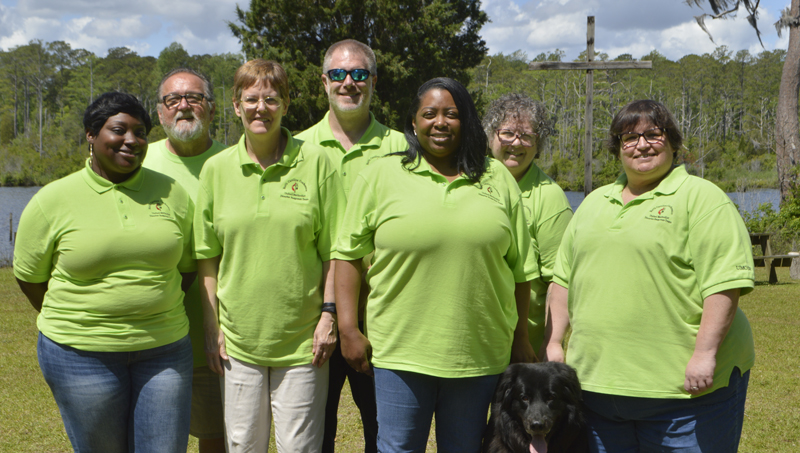 Eight years later, they’re still here. A series of disasters, including direct tornado hit in 2014, Tropical Storm Julia in 2016, Hurricane Matthew in 2016 and Hurricane Florence in 2018, have kept the group in Beaufort County.

In the wake of each storm, homeowners and families throughout the region have been left with significant damage to their homes and United Methodist Disaster Response is seeking volunteers and work groups to help address those needs. From mucking out houses and spraying for mold to repairing structural damages, the group currently has 96 clients it is serving out of the Washington center —  some of whom are still waiting for help from Hurricane Matthew.

“Our job is to work ourselves out of a job,” said Donna Brander, UMC Disaster Response Administrator and Casework Manager for the organization’s Washington site. “But the hurricanes come when they’re going to come.”

From a central location on the shores of Broad Creek, the local Disaster Relief team is a hub for the region, serving in Beaufort, Hyde, Pamlico, Craven, Tyrell and Pitt counties. Nine months after Hurricane Florence, Brander says there are still homes in the area that have not been touched.

“They just want their space back,” Brander said. “They’ve lost everything — all of their clothing, all of their dishes, everything has been flooded, infected or washed away. There’s bacteria and mold that’s just growing in the house, and you have to deal with that. You go into some people’s houses and they have no places to go and they live with masks on. It can be very hard.”

At the heart of the group’s efforts, UMC Disaster Response relies on volunteer labor, and throughout the country and beyond, churches and work groups have answered the call, coming from as close as First United Methodist Church in Washington to as far away as Uzbekistan.

“Volunteers are our lifeline,” said construction Manager John Raimer. “They’re what keep us going. We’ve got a couple of local churches that help pretty frequently, and it’s a huge help. We could use a lot more of it. There are a lot of needs. There are a lot of people in the community that are not living at home still or are living in conditions most of us wouldn’t live in because the houses need repairs.”

The United Methodist Disaster Response facility is equipped to host up to 41 volunteers groups on site, with the ideal group size being between 10 and 15 people. Volunteers must be 14 or older, and local groups are encouraged to help.

The facility is equipped with bunk beds, showers, a kitchen where volunteer groups can cook their own meals and after a hard day’s work, volunteers can spend their evenings in a rustic, camp-like environment to recharge.

“Every day, I know that we’ve helped somebody in some way, and that’s a wonderful way to spend your days,” Brander said.

To volunteer with United Methodist Disaster Response, or to coordinate a work group, call 1-888-440-9167.

Garden club offers herbs from “A to Y”