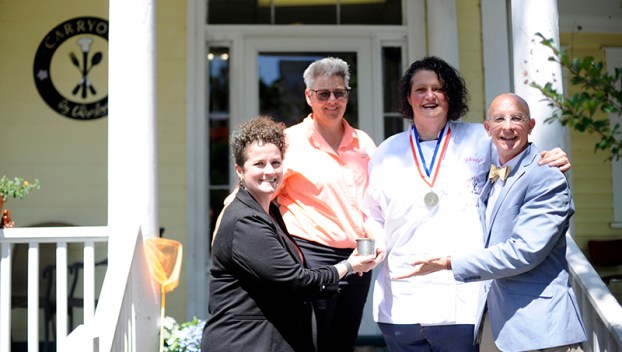 AWARD WINNING: Chrislyn Wedderien, owner of Carryout by Chrislyn, and Marie Peedin, the owner of the circa-1889 house in which it’s located, were recognized by the City of Washington for their rehab of the once residential, now commercial building, while keeping the building’s character and historic feel. Pictured (left to right) are Emily Rebert, the City of Washington’s community development planner, Peedin, Wedderien, and Scott Campbell, a local realtor and historic preservation supporter. Wedderien is also wearing the Governor’s Medallion Award for Volunteer Service she received last week for her work in feeding those in need after Hurricane Florence. (Vail Stewart Rumley/Daily News)

Home of Carryout by Chrislyn stands out for blending in

It takes some careful work to turn a circa-1889 residential home into a commercial kitchen, catering and take-out business. But that’s exactly what Marie Peedin, and Chrislyn and Mike Wedderien have done.

For that, the City of Washington is recognizing the hands and hearts behind Carryout by Chrislyn with the Terrell Award for Good Neighbor.

“They’ve taken a residential, mixed-use property, which has a very commercial use, but it still retains the character and feel of the residential neighbor where it sits,” said Scott Campbell. “It feels like just another house in the neighborhood. It blends in, but, still, you know it’s commercial.” 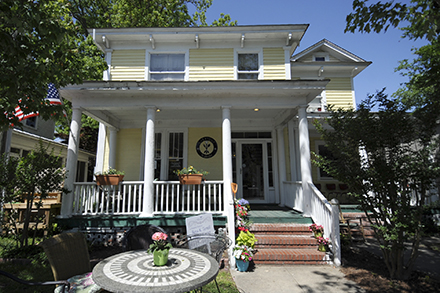 SECOND GLANCE: It may look like another historic home in downtown Washington’s historic district, but Carryout by Chrislyn boasts a commercial kitchen along with its typically southern front porch and seating, original windows and a menu that pleases plenty of palates. (Vail Stewart Rumley/Daily News)

Campbell, a local realtor and supporter of historic preservation, along with Emily Rebert, the City of Washington’s community development planner, announced the award Wednesday.

Named for one of Washington’s founding historic preservationists, Rena K. Terrell, the annual awards were reinstated in 2015 by Rebert and Campbell to recognize property owners who make the extra effort to preserve Washington’s history in four categories: Best Residential Rehab, Best Commercial Rehab, the Good Neighbor Award and Stewardship Award.

Recognition for Wedderien’s work just keeps stacking up: last week, she was given the Governor’s Medallion Award for Volunteer Service at a ceremony held at the Governor’s Mansion in Raleigh, for her efforts to feed first responders and many in need across eastern North Carolina in the months after Hurricane Florence. For Wedderien, and building owner and engineer Peedin, redesigning the home of Carryout by Chrislyn in keeping with its original use was the plan from the start.

“It was important for us to retain that home feeling, because everything (here) is homemade,” Wedderien said. 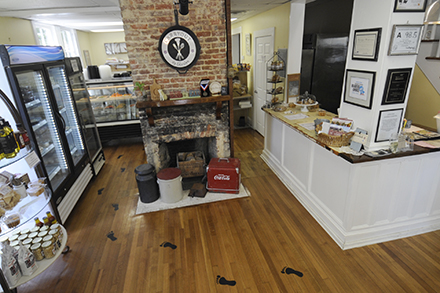 JUST LIKE HOME: The retail space of Carryout by Chrislyn has a uniquely homey feel, just as the food served there is uniquely home-styled. Original wood floors, exposed chimney with 100-year-old mantel made of wood native to Beaufort County and a creative floorplan welcome customers. (Vail Stewart Rumley/Daily News)

Not many businesses have a front porch with seating, nor are their windows original, wavy glass or their front doors open to public — a sign of welcome for customers and passers-by.

“That’s another thing: they did this adaptive reuse and did it so well, she didn’t even have to go in front of the (Historic Preservation) Commission,” Rebert said.

Carryout by Chrislyn originally set up shop in 2016 in the smaller of two commercial spaces on the ground floor of the building. By July 2018, they had expanded. With that expansion came negotiation: Wedderien had ideas about how she wanted the interior to look, while Peedin had practical matters in mind, including incorporating an electrical system that could withstand commercial kitchen equipment.

“That’s the difference between a chef and an engineer,” Wedderien laughed. “We’re the only commercial kitchen in Washington in a residential home.” 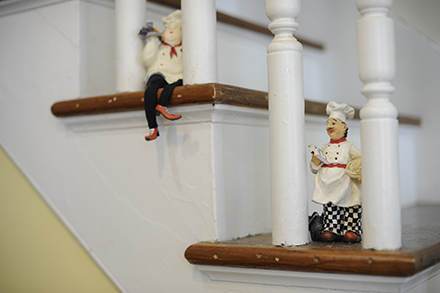 WHIMSY: Chef figurines hide amongst the balusters leading to the second floor of what was once a West Second Street home and is now Washington’s only commercial kitchen in a residential home. (Vail Stewart Rumley/Daily News)

But proof of the building’s residential roots remains.

“The (hardwood) flooring over here is all original. We took carpet out and refinished the floors,” Peedin said.

They also made a chimney, complete with its original tile hearth and once hidden behind a wall, a focal point of the retail space. Once opened, friends and strangers alike stopped by to donate kitchen antiques to lend even more authenticity to the renovation — an antique waffle maker, an old Coca-Cola icebox, among them. An art installation over the ready-made food case incorporates even more of those 1920s-to-1930s-era antiques.

“Everyone can look at it and say, ‘My grandmother had that,’” Wedderien said.

Wedderien brings that same homey feel to her food, often recreating recipes from her own childhood; recipes that played a part in many others’ childhoods, as well.

“We pull out of our memories: pea salad, beets — you never see fresh beets anymore,” Wedderien said. “It’s family food, special food. We’re helping families celebrate, going from the bridal shower to the wedding to the baby shower, seeing families grow. Food helps us celebrate in so many ways, and that’s that feeling of home.”

“It provides people a sense of place,” Rebert said of Carryout by Chrislyn. “It’s what historic districts do.”

Carryout by Chrislyn is located at 128 E. Second St. in Washington. 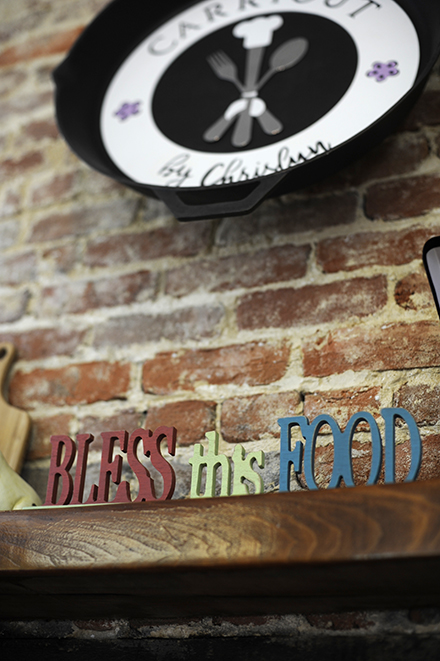 FAMILY-STYLE: Along with kitchen antiques donated by friends and strangers to decorate the retail space, a sense of home is conveyed with a simply blessing. (Vail Stewart Rumley/Daily News)

Since 1989, limited voting for Beaufort County Commissioners has been a topic of discussion — at times, a polarizing discussion.... read more