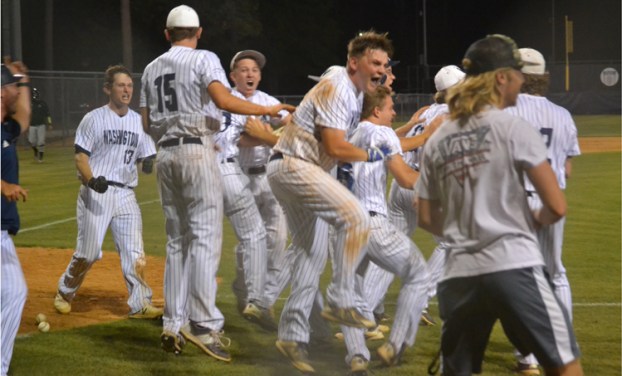 JUMPING FOR JOY: The Washington Pam Pack erased a 12-3 deficit on in May of 2019 in the second-round of the NCHSAA playoffs over Ayden-Grifton. (Mitchell Thomas / Daily News)

Washington completes comeback for the ages

WASHINGTON — Pam Pack come back from a 12-3 deficit with Ayden-Grifton to defeat the Chargers 13-12 Friday night in Washington.

In the top of the fifth with no outs, Pam Pack pitcher Tyler Rowe came into the game and did a fantastic job. He pitched the remaining three innings without allowing a single run, which opened the door for the miraculous.

The comeback was on. In the bottom of the fifth, the Pam Pack was able to get some big hits from Jeremiah Moore and Robert Pollock doubles to cut the deficit to 12-5.

In the sixth, it was Pollock again with a long fly ball that hit the top of the wall. Pollock’s pinch runner would score on Will Crisp’s two-RBI double as they continued to chip away at the lead.

In the seventh, an infield single was followed up by a bloop single from Wilson Peed that got the crowd into it. Ayden-Grifton brought in two different pitchers in the inning to try to stop the rally, but it almost seemed like destiny for the Pam Pack to win it.

A walk would load the bases, and a balk scored another run. On the ensuing at-bat, Logan Everette crushed a two-RBI double to right center field to make the score 12-11. After a couple of long foul balls, Hunter Hall got a hold of one and ripped it down the third-base line to tie the game.

“We just kept scoring. We got the fans into it, and that just hyped us up even more,” Hall said.

The Chargers didn’t record a single out in the frame, and Pollock polished it off with a walk-off single to right field to score the game-winning run.

“Everything in that last inning felt good, I was just glad we could keep the season going,” Pollock said. “I don’t think I’ll ever (be a part of a win like that) again. That was a once in a lifetime game.”

Pollock finished 3-for-5 with three RBIs.

Pam Pack head coach Kevin Leggett said he’d never been a part of something like that in his coaching career.

“Nothing anything close,” Leggett said. “That’s up there past winning a conference championship to see a team fight like that. They never gave up, we fought the whole night.”

WASHINGTON — It was much of the same for the Pam Pack softball team on Tuesday evening as they used an... read more