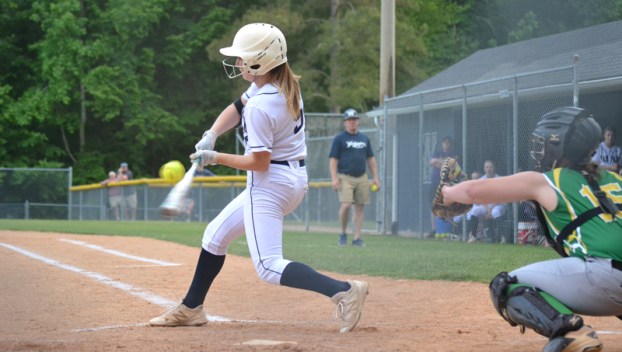 CLUTCH: Washington’s Summer Campbell comes up big with a two-RBI single to take the lead in the Pam Pack’s 2-0 win over Bunn on Friday night to advance to the third round of the 2-A state playoffs. (Mitchell Thomas / Daily News)

Another complete game gem from Washington’s (22-0) Abbi Tucker — who improved to 19 wins in the circle on the season — Summer Campbell’s two RBI’s and some great defense helped propel the Pam Pack into the third round of the 2-A state playoffs.

Both pitchers for each team brought their A-game. With a total of five hits in the ball game combined, it was just a matter of who would blink first, and it wasn’t Tucker.

“My screwball, my drop curve, fastball, I was just throwing it all because this team is really good. If I didn’t throw everything they would’ve started hitting something,” Tucker said. “My offense was great, my defense was phenomenal, especially Laci — she made two diving catches.”

The junior, Tucker, is also in the running for High School OT honors as one of the best softball players in the state of North Carolina. Voting is open on the website until May 19.

The Pam Pack got Laci Campbell on base to begin the second inning, Mary Emma Holscher walked, and the senior Summer Campbell came through in the clutch, roping a two-RBI single to give the Pam Pack the edge.

Washington head coach Doug Whitehead has praised his defense all year long, and he did so again after Friday night’s game.

“Once again, we’re doing it with defense. We had some great defensive plays tonight,“ Whitehead said. “Abbi was big time on her game. She kept them off stride. Once again, when you get to this level in the second and third rounds, it’s whoever has a hiccup first, tonight we got a couple hits, and we were able to take advantage of it. Summer thought she had struck out, got another chance at it and hit it right over the shortstop’s head.“

Freshman Laci Campbell made two spectacular catches in right field Friday night, and she emphasized the importance of defense in the playoffs.

“(Defense) is very important. It’s important especially in short ball game and you’re not scoring very many runs, we have to stop them from scoring runs too,” Laci Campbell said.

Washington will again host in the third round of the 2-A state playoffs, as eighth-seeded Richlands (17-7) will visit the No. 1 seeded Pam Pack on Tuesday night. First pitch is set for 7 p.m.

Washington completes comeback for the ages

WASHINGTON — Pam Pack come back from a 12-3 deficit with Ayden-Grifton to defeat the Chargers 13-12 Friday night in... read more