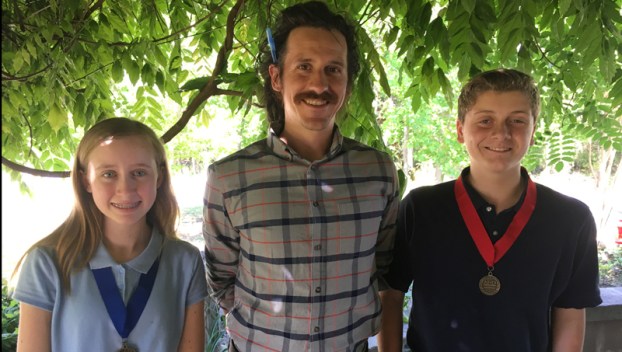 But that’s not the case for Washington Montessori Public Charter School students John Hinchy and Aisling Casey. After winning second and third place prizes, respectively, for a pair of projects at the National History Day state competition on April 27, the two are preparing to represent their school and their state at the national level in June.

“This year’s theme was ‘tragedy and triumph’ and obviously that kind of molded into whatever topic they saw fit,” said WMPCS History instructor William Mitro. “It’s up to the students to really showcase that.”

Casey, a seventh grader, earned first place in the statewide competition for a website she designed on “Health and Horror in Victorian England.” Hinchey, an eighth grader, meanwhile took second place statewide for his website focusing on “How the Apollo 1 Incident Put America’s Space Program on a Path to Success.”

Both students opted to build websites to display the findings of their historical research. Other options included writing an essay, presenting a performance piece on the topic or creating a traditional cardboard display similar to what one might see at a science fair.

“They designed these websites from scratch,” Mitro said.

To bring it all together, Mitro says that the students took to their historical research at a level that might be expected from college students. Delving into both primary sources that were written at the time of the event, and secondary sources from other historians.

“John showcased something amazing,” Mitro said. “He was able to get an interview with one of the Apollo 1 chiefs, one of the guys at ground control. He actually had a phone interview with this guy and that was huge… throughout the building process, they’re finding little pieces of evidence that fit in with what they’re trying to say.”

Both Casey and Hinchey will represent Beaufort County at the national competition in College Park, Maryland from June 8-13.

“The love for history was all on them,” Mitro said. “The primary sources — some of that was at the college level with how they interpreted it. These kids are going to do some amazing stuff.”