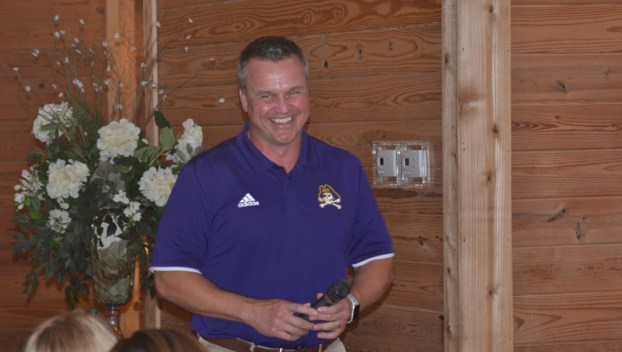 WASHINGTON — It was a beautiful evening at Fox Hollow Farms Monday night, as the Pirate Club Armada made a stop in beaufort county.

An extravagant display of purple and gold shined through every square inch of the dining room and back patio of the venue. Guests enjoyed a scrumptious layout of food and beverages while the East Carolina University athletics department spoke about the changes that are coming to the Pirates’ sports venues and football program.

New ECU Athletic Director John Gilbert is planning on redoing the Minges Coliseum court floor, along with some other small renovations to other sports venues.

“We will not have the biggest budget in the conference, that’s just fact. But, that will not stop us from being competitive,” Gilbert said.

The entire ECU athletics department has a lot of new faces. One of those is new head football coach Mike Houston, who boasts a 80-25 record as a head coach at Lenoir-Rhyne, The Citadel and James Madison — where he won an FCS national championship in 2016. He echoed Gilbert about being competitive in all facets of the program, which starts in the classroom.

“We wanted to have a team GPA above a 2.7,” Houston said. “This spring (semester) we had a 2.74 team GPA which is the highest in school history for our football team.”

That statement was followed up by a very loud ovation, with a nod of approval from Gilbert.

“We signed a very solid recruiting class. You’ll see a lot of these guys contributing next season,” Houston said.

The most important part of being a first-year head coach at a new school is getting the players to buy in to the program. Houston thinks his team has done that.

“Our players are tired of being 3-9. So, they’re as ready as anybody for a change,” Houston said. “Our first test of our players being ‘bought-in’ will be the first time we face adversity this season. So far, they’ve done a great job of buying-in.”

Houston will run his team onto the field for the first time on Aug. 31, as they travel to Raleigh to take on in-state rival, the North Carolina State Wolfpack.