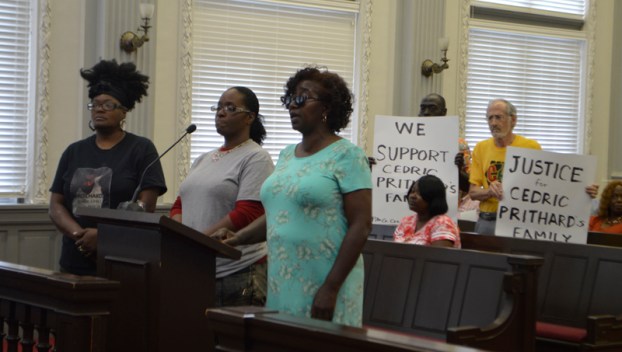 APPEALING TO COUNCIL: Teresa Pritchard, left, Danielle Glass, center, and Willie Roberts, right, spoke before the Washington City Council during Monday’s meeting, seeking the release of video footage from the Oct. 21 officer-involved shooting of Cedric Pritchard, as well as the firing of the officer responsible. (Matt Debnam/Daily News)

The family of a man shot and killed by a Washington Police Department officer last October appeared before the Washington City Council ON Monday with two goals: the release of police dashcam footage that captured the incident and the firing of the officer who pulled the trigger.

“I’m here on behalf of my son that got murdered in 2018,” Teresa Pritchard told the council. “I would like to get the video released so the public can see it,and I want to see if I can get Officer Aaron Mobley fired.”

According to the findings released by District Attorney Seth Edwards in March, Cedric Pritchard was shot in the back during a traffic stop on the afternoon of Oct. 21 after exiting his vehicle with a loaded 38-caliber handgun. The same release stated that the officer was familiar with Cedric Pritchard from former dealings, and that the 27-year-old man was a suspect in two separate felony assaults that occurred on Oct. 19 and Oct. 20. In his release, Edwards determined that criminal charges were not warranted against the officer, and that the weapon in Pritchard’s hand justified deadly force.

After Teresa Pritchard addressed the council, Washington Mayor Mac Hodges expressed his sadness for the family’s loss and read from a prepared statement:

“As your elected or appointed government representatives, it is our goal and we work every day to preserve and enhance the health, safety and welfare of all Washington citizens. We are therefore saddened and concerned about the death of Cedric Pritchard and appreciative for the thorough and thoughtful investigation of the matter by the independent professionals that also serve our citizens. Our thoughts and prayers are with the family and friends of Mr. Pritchard. However, because of potential legal issues and on advice of counsel, we will not comment further on this matter and refer any future inquiry to the City Attorney.”

“On the afternoon of October 21, 2018, Cedric Pritchard was mortally wounded by gunshots from a City of Washington Police Department officer during an attempted traffic stop. The Department immediately reported the incident to the State Bureau of Investigation to investigate. The Department turned over all information, records, recordings and other evidence to the SBI. The Department and the City cooperated fully with the SBI agents who gathered and evaluated all of the evidence relative to the incident. That evidence was reviewed and evaluated by independent professionals as well as appropriate officials qualified and experienced in the fields of law enforcement practices and use of force. The City appreciates the work of the SBI, independent professionals and officials, and accepts their opinions and conclusions.”

The Pritchard family, however, has not accepted those conclusions. In an interview after speaking at the meeting, Teresa Pritchard confirmed that her family has been speaking with attorneys and is considering pursuing a lawsuit against the city, as well as legal options to have footage of the shooting released to the public.

“He was murdered,” Teresa Pritchard said. “The way the officer, Aaron Mobley, did it, he could have did it another, different way. He could have tazed him, no further than the distance he was.”

Also showing up at the meeting in support of the Pritchard family were several members of the Beaufort County NAACP, as well as members of the Greenville-based Coalition Against Racism.

“I’m a former police officer, and I understand the dangers policemen have,” former Beaufort County NAACP President Bill Booth added. “In my training, it was illegal to shoot an individual in the back, especially when he was fleeing, and that’s what we believe happened and according to the district attorney. So let’s see the video and let the chips fall where they may.”

Under a 2016 change to North Carolina state law, recordings made by law enforcement agencies are not considered public record, and require a court hearing and a judge’s order to be released to the public.

Passion for the field defines Partnership ED’s commitment to children

The time between infancy and five years old is critical to a child’s mind — and future. Jessica Burnham has... read more