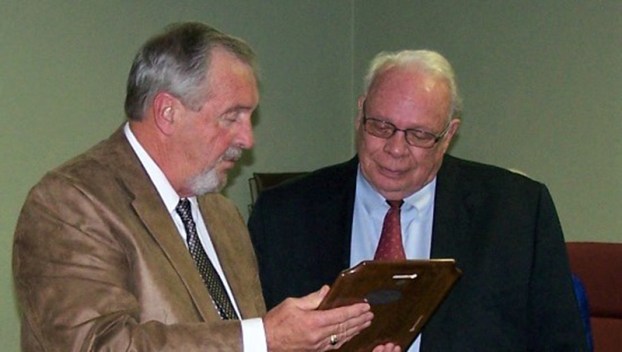 The late Mike Griffin (right) was honored on December 4, 2017, at his retirement after 10 years as Mayor of Columbia when incoming Mayor James Cahoon presented Griffin a plaque to commemorate his public service. (R. McClees photo)

The Columbia Board of Aldermen on May 6 remembered the late Mike Griffin in the following resolution of respect:

“Whereas, F. Michael Griffin was elected Mayor of the Town of Columbia in November of 2006 and served until retirement in December of 2017; and

“Whereas, Mayor Griffin served the residents and businesses of the Town of Columbia with dedication and distinction for ten years; and

“Whereas, Mayor Griffin represented Columbia and Tyrrell County on several boards and commissions while also serving as an ambassador of good will for the community; and

“Whereas, Mayor Griffin made a positive and lasting contribution to the Town of Columbia as an elected official, through work in his church and through civic service,

“Now therefore be it resolved, by the Board of Aldermen of the Town of Columbia, that they do hereby honor the memory of F. Michael Griffin for faithful service and lasting contributions,

“Be it further resolved that a copy of this resolution become a part of the minutes of the Town of Columbia and the original copy be signed by the Mayor and presented to the Griffin family as a form of appreciation and respect.”

The resolution was introduced by Alderman Hal Fleming and adopted unanimously; and the board and all present then observed a moment of silence.

The Tyrrell County Planning Board is scheduled to meet at 7 PM on Tuesday, May 14, to review a plat... read more