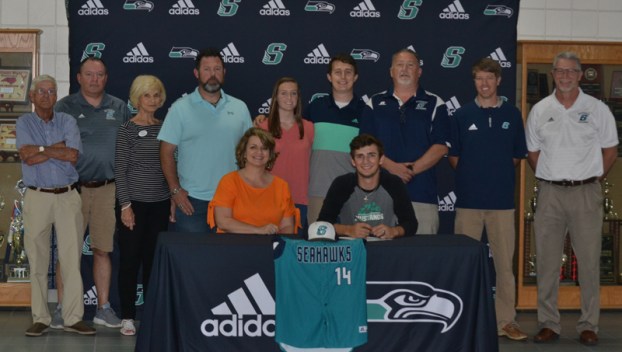 SIGNED: Southside Seahawks baseball star Will Warren signs his National letter of Intent to Mid Atlantic Christian University on Tuesday afternoon with his family and coaches by his side. (Mitchell Thomas / Daily News)

Surrounded by his family and friends, Warren said he was excited that his hard work this season didn’t go unnoticed. In his senior year, he posted an eye-popping .516 batting average with 15 RBIs and scored 25 runs.

“I actually picked up hitting lessons in Greenville this year,” Warren said about how this season was different than years past. “I’ve never had a problem hitting the ball, it’s just more of hitting it in the gaps and putting the ball where I need to instead of hitting ground balls.”

Warren will be headed to MACU to be a position player, likely at shortstop or third base and potentially in a designated-hitter role early on.

He explained his thoughts through the recruiting process, and not wanting to stray too far from home.

“I had a couple offers in Virginia, but I just wanted to be somewhere I could leave campus and come back home to see everybody and get my home-sickness out,” Warren said.

Southside head coach Kevin McRoy had nothing but high praise for his senior star player.

“They’re (MACU) getting a great kid. He loves the game of baseball; he studies it and wants to get better each day,” McRoy said. “His work ethic is incredible. He does everything you ask him to do, plus more. He’s the type of kid that always asks ‘Can I get another bucket?’ whether it’s in the cage or whether it’s fielding. He just wants to improve and get better.”

Warren had a ton of people to thank has he reflected on his four years at Southside.

“I want to thank my dad, he was my coach growing up, he’s taught me pretty much everything I know,” Warren said. “Coach McRoy, who would set me straight and call me out on my excuses and stuff, and my family in general, they’ve always supported me wherever I was playing ball at.”

Southside will miss Warren’s production next season, but everyone around him is proud to see him continue pursuing his baseball dreams for the Mustangs in Elizabeth City.