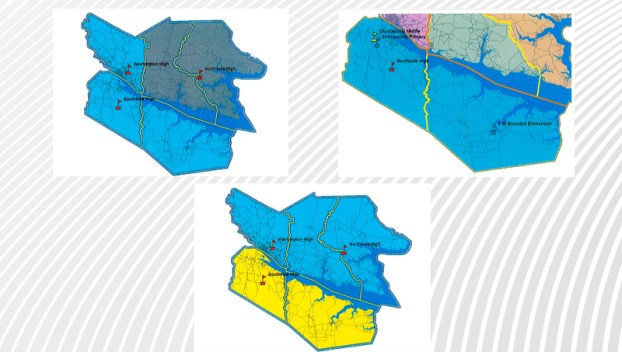 “This is very common in rural parts of North Carolina during this duration,” said Thomas Dudley, OREd’s program manager. “Of that drop, about 130 were attributable to charter schools.”

If the forecast presented by OREd is correct, that trend is likely to continue over the next decade. Projections for the 2028-29 school year show student enrollment at approximately 5,548 students, a decline of more than 750 students from this year forward.

With those projected declines in student population comes a decline in revenue expected from the state of North Carolina, which is paid per-student to the county, based on average daily membership. According to the study, this overall decline in membership would in turn leave all but two schools in Beaufort County at or below 80% capacity.

“S.W. Snowden, which is the bottom school in the elementary block, has a current enrollment of around 160 students at a 400-something capacity facility,” Dudley explained. “Currently, the high schools are at about 58% utilization, which goes down to about 50% utilization at the end of the forecast, so for each student in the district, there would be an additional empty seat at the high school level at the end of 10 years.”

The result of this number crunching was three scenarios for closing and repurposing local schools in Beaufort County:

Members of both boards questioned the study’s projected enrollments and listed school capacities. BOE members pointed out a number of issues with the study, such as the exclusion of pre-K students from enrollment figures, capacity requirements for exceptional children classes and the inclusion of modular units when calculating school capacities.

As to school closures, BCS Superintendent Matthew Cheeseman says any such decision would require consideration of not only finances, but how a closure would affect students, teachers, faculty and communities as a whole.

“Making that decision to close a school not only includes the fiscal side of things, but also the human capital side, meaning you’re going to impact people,” Cheeseman said. “Based on the study and the question of school closure, in order to be fiscally solvent in a county like Beaufort, where you’re looking at a potential shortfall of students, the responsible thing is to look at how you are spending the taxpayers’ money, and yes, you may have to consider what schools you may have to close.”

The family of a man shot and killed by a Washington Police Department officer last October appeared before the Washington... read more