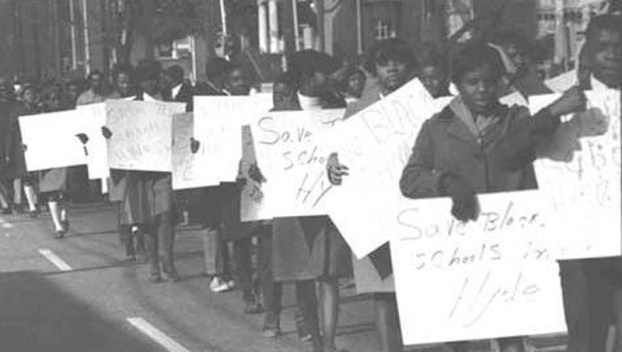 SAVE BLACK SCHOOLS: Protesters fought against the closing of traditionally black public schools during the Hyde County School Boycott of 1968-1969. (North Carolina Museum of History)

A dedication of Hyde County’s newest North Carolina Highway Historical marker will be held in Swan Quarter on Saturday, May 25. The Hyde County School Boycott (know locally as “The Movement”) of 1968-69 will be commemorated with the unveiling of the prominent silver-and-black sign following a short ceremony that begins at 3 p.m. All activities will take place on the grounds of the Hyde County Government Center, 30 Oyster Creek Road. The public is invited to attend.

The N.C. Highway Historical Marker Program was established in 1935 in an effort to standardize the practice of marking sites of statewide historical significance. There are markers in each of the State’s fifty counties. This will be the eighth such marker in Hyde County.

The school boycott in this rural eastern North Carolina county was prompted by a desegregation plan put forth by the Hyde County Board of Education that called for the county’s black schools (O. A. Peay School in Swan Quarter and Davis School in Engelhard) to be closed. Blacks, who had been left completely out of the planning process, were dismayed at the lack of respect for their educational heritage and the impending closure of their schools.

The “Committee of 14” (6 men and 8 women – two persons from each of seven black churches of every local denomination) was formed. Trusted leaders in the black community, the group set about to learn about the latest Hyde County plan. When discussions with the local school board proved fruitless, they developed their own counter-strategies with the help of Golden Frinks, state field secretary for the Southern Christian Leadership Conference. The school boycott that followed was one of the most sustained and successful civil rights protests in America. It lasted much longer than anyone anticipated and was still strong when the school year came to an end. Most of the county’s black children had lost a year of school and a resolution was still not at hand.

During the 1969 summer school recess, the school board came up with two new plans. The first plan called for the two black schools to be shut down with all students transferred to the new and centrally located Mattamuskeet School. It also included a $500,000 bond issue for funds to expand Mattamuskeet to accommodate all students. Plan 2 would utilize all three schools by converting the two black schools into elementary schools and Mattamuskeet into a high school. This plan required no new construction and only modest renovations. Other advantages to Plan two included shorter bus routes and the separation of elementary and high school students. If Plan 1 failed at the polls, Plan 2 would automatically be enacted.

Realizing that the 1969-70 school year would begin before the issued could be resolved, the Hyde County Board of Education and the Committee of 14 met together and the boycott was postponed pending the election. In November, the bond referendum was defeated by a four-to-one margin and the black schools remained open. The Movement had served its purpose well.

David C. Cecelski, noted eastern North Carolina historian and author, will be the guest speaker at the dedication. His book “Along Freedom Road: Hyde County, North Carolina and the Fate of the Black Schools in the South” documented the year-long boycott which has become known as one of the most sustained and successful civil rights protests in America. Cecelski will be at the Swan Quarter Volunteer Fire Department from 11 a.m. until 2 p.m. selling and autographing copies of this book. All proceeds will be donated to the SQVFD. Other books about the history of eastern North Carolina by Cecelski will also be for sale.

Also scheduled for this date is the monthly Swan Quarter Volunteer Fire Department lunch/dinner at the station located directly across from the dedication activities. Fresh shrimp, buttered potatoes, coleslaw, dessert, and ice tea will be served from 11:30 am until 7:00 pm. The cost is $10 per plate ($5 for children under 12).

From Pamlico Sail & Power Squadron Most recreational boaters, sailors, personal watercraft and fishermen are by now either on the... read more