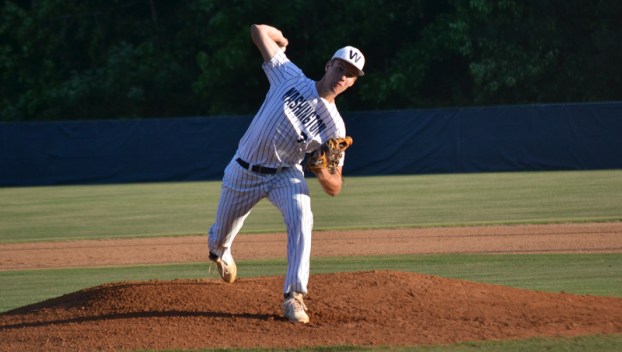 ALL-AMERICAN: Washington’s Hunter Hall at the top of his release in a game against Randleman in the fourth round of the playoffs last season. Hall was selected as a small school All-American according to MaxPreps.com. (Mitchell Thomas / Daily News)

WASHINGTON — The Washington Pam Pack took care of business again Tuesday night, eliminating an early deficit to beat North Johnston and advance to the fourth round of the 2-A state playoffs, 5-2.

Hunter Hall took the mound again for the Pam Pack (19-5) and still remains unscathed this season achieving a 10-0 record on the bump. He managed to pitch around an early run in the first, without getting into much trouble thereafter.

Hall pitched five innings. Only giving up two runs on five hits and struck out eight Panther hitters on the evening.

“Getting ahead early on them, then mixing in some junk to get them off guard,” Hall said. “Pretty much all game that’s what I was doing. First pitch curveballs, first pitch changeup sometimes, just kept doing that the whole game.”

Despite an early deficit, Wilson Peed reached first to lead off the bottom of the first. A groundout and a stolen base got him to third, before Hall chased him home with an RBI-single to right field.

In the second, Robert Pollock walked, and pinch runner Hayes Pippin would make his way to third on a ground out and two walks to Will Crisp and Hayden Anderson. Pippin would score on a bases loaded single from Mason Weaver, but the Panthers’ shortstop fielded the ball just beyond the lip of the grass and threw home to cut down Crisp to end the inning.

The Panthers would get a runner on by way of a walk in the third inning that would eventually score on a groundout to the shortstop to tie the game at 2-2.

Weaver again reached base to start the fifth, as an error by the second baseman set up a Logan Everette double to center field. On the ensuing at-bat, a throwing error scored Weaver to take a 3-2 lead.

Needing insurance, the Pam Pack got it done again in the sixth. J.D. Swain got a fly ball to drop in the outfield, and Peed would walk to bring Weaver to the plate. He came through with an RBI-single to right field to score Swain.

“I was already confident enough to swing at the first pitch,” Weaver said after his 2-for-4, two-RBI performance. “I swing at everything, basically, but it was there so I swung.”

Everette came to the plate on the next at-bat following a pitching change, and ripped an RBI-double down the third-base line to score Peed and give himself some cushion on the mound.

“I thought, ’Just hit the ball hard somewhere,’ and it just soared,” Everette said. “We just got to come ready to play (Friday). Hit the ball, throw strikes and make the plays.”

Everette polished the game off on the mound pitching two innings, getting three strikeouts without allowing a hit.

Pam Pack head coach Kevin Leggett was excited to see his team head to the fourth round on Friday.

“Tonight, we had to kind of grind it out,” Leggett said. “It was a close game all night, got some insurance in that last inning. Great game by both of our pitchers, and we got the runs when we needed them tonight.”

The Pam Pack will host East Bladen (19-6) on Friday night in the fourth round. First pitch set for 7 p.m.

WASHINGTON — The Watkins Athletic Award is a special award in the Beaufort County area, as it is awarded every... read more